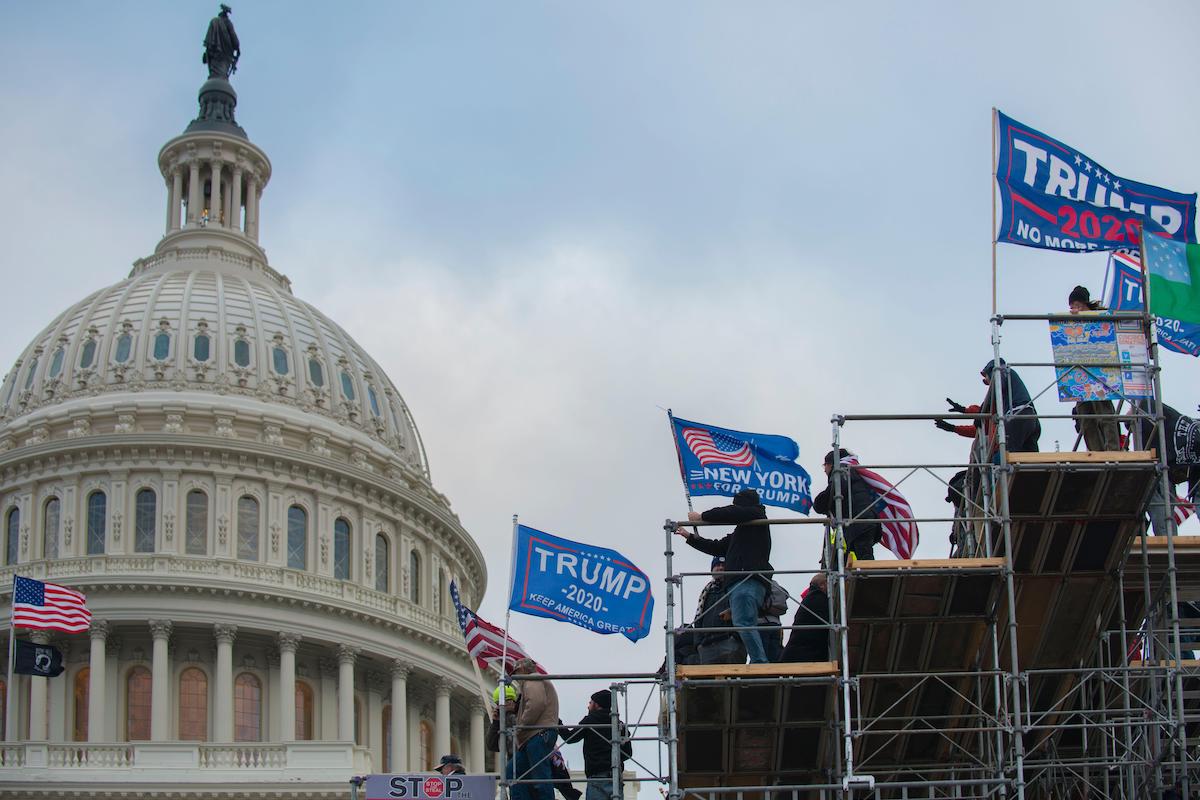 The assault on the US Capitol, not by foreign invaders but a domestic mob, left the American public (outside the most hardened and credulous pro-Trump precincts) bewildered and alarmed. The ubiquitous refrain from reporters on the scene struck a note of incomprehension: “This is happening in the United States of America.” The unspoken subtext was clear: such an outbreak of fanaticism was the stuff of banana republics, and no part of the American tradition. But this attitude served only to remind viewers of Gore Vidal’s quip that U-S-A stands for the United States of Amnesia. For the Trump mob’s invasion of Congress was scarcely the first time Americans have surrendered to mass frenzy. Almost two centuries ago, a spirit of anarchy seized the people, and the country began degenerating into bedlam.

The source of mob violence in that day lay not with any particular partisan social or political cause. There were mobs motivated by religious sectarianism, hostility to gambling, and naked xenophobia. The passions loosed by the “peculiar institution” of slavery, of course, helped propel this cascading mayhem. In the autumn of 1837, the antislavery editor Elijah P. Lovejoy died at the hands of a racist mob in Alton, Illinois. Mobs had previously destroyed several of Lovejoy’s printing presses, but on this occasion he was shot after confronting a raucous crowd in defense of his property. His murder marked a crescendo of anti-abolitionist violence that disrupted the peace of the antebellum United States. In October 1835, Boston’s mayor had to imprison William Lloyd Garrison to protect the abolitionist from maniacs who threatened to lynch him. In Cincinnati, a mob destroyed the establishment of the antislavery editor James G. Birney, hauling away his printing press and heaving it into the Ohio River. In St. Louis, a black sailor, Francis McIntosh, was chained to a tree and burned to death by a mob after he killed a policeman who had threatened his friends. In New York, mobs destroyed stores and churches associated with antislavery leaders, and race riots broke out.

On January 27th, 1838, this pattern of anarchic behavior received a forceful denunciation from an obscure Whig lawyer at the Springfield Young Men’s Lyceum. A 28-year-old state legislator named Abraham Lincoln delivered an address entitled “The Perpetuation of Our Political Institutions.” He declared that the country was bedeviled by “this mobocratic spirit… now abroad in the land” which, he feared, threatened to destroy American democracy. If the country did not rein in the “wild and furious passions” that had been unleashed by “the vicious portion” of the American populace, he warned, then “this Government cannot last.” His thinking was clear: both those who indulged in lawlessness and those who fell prey to it would eventually come to regard “Government as their deadliest bane… and pray for nothing so much as its total annihilation.” It was this feeling of “alienation” rather than “attachment” to public institutions painstakingly built by “the patriots of seventy-six” that Lincoln feared most.

Lincoln also warned people of the dangers posed by designing and ambitious men—“an Alexander, a Caesar or a Napoleon?”—who, in their amoral search for glory and power, would pose a direct threat to American self-government. “Is it unreasonable, then, to expect that some man possessed of the loftiest genius, coupled with ambition sufficient to push it to its utmost stretch, will at some time spring up among us?” Lincoln asked. The antidote to this threat, he argued, was to introduce and develop a “political religion” that emphasized “reverence for the laws.” This was no small proposition. “As the patriots of seventy-six did to the support of the Declaration of Independence,” he said, “so to the support of the Constitution and Laws, let every American pledge his life, his property, and his sacred honor.” In this endeavor, passion was our enemy; it had to be tamed. Whatever use it may have been in the past, in the days of revolution against despotism, it could be no more. “Reason—cold, calculating, unimpassioned reason—must furnish all the materials for our future support and defense.”

The materials for our support and defense have again been found wanting among the citizenry and the governing class. In the present moment, reverence for the law is not yet (or is no longer) a political religion in the United States. This is readily apparent in the rise of a demagogue to the highest office in the land. Trump has always been a lawless creature, and it was entirely predictable that his term in government should end, not with the “reflection and choice” recommended by Hamilton at the outset of the American experiment, but with the “accident and force” that Trump has always expressed and embodied. But the crisis of legitimate authority is also evident in the character of the partisan argument that has ensued since last Wednesday’s siege. Republicans have broadly pointed out that those condemning the mob action in this case were silent, or openly supportive, when mobs associated with progressive causes were tearing asunder American cities after the death of George Floyd. Democrats, for their part, have tended to offer the rejoinder that Republicans who protested mob violence so vehemently last summer are now taking refuge in whataboutism and meekly pleading for “unity” as a prophylactic against Trump’s impeachment.

It involves no false equivalence between a mob that loots stores on Manhattan’s Fifth Avenue out of private criminality and another mob that storms the halls of Congress to overturn a democratic election to suggest that both these criticisms ring true in important respects. Neither faction has an unequivocal or even conspicuous reverence for the law. Both camps evince a sense of impotence when confronted with corruption and arbitrary acts on their side that makes a mockery of civic virtue. What’s worse, each side feeds off and inflames the other. The increasingly barbarous and backward nature of our political culture, reliably proposing remedies worse than the ills they purport to cure, bears this out. But first things first. Only one of these delusional and dangerous factions has managed to misuse the presidency to corrupt almost an entire political party and besmirch the institutions of the nation. The bored and privileged denizens of the Republican party stirred a mob to invade Congress at the very hour it was carrying out one of its most solemn constitutional duties.

Trump’s contempt for that delicate constitutional system has never been a secret. He repeatedly refused to pledge to respect the outcome of the 2020 election unless it was “fair” (which is to say that he won it). His disdain for every norm of republican government was sometimes latent and sometimes explicit, but always inevitable. He preferred to stoke distrust for the integrity of American elections and encourage insurrection against legislators than to comply with the will of the people. Even after his unambiguous electoral defeat, when his contempt for democracy flared into the open, Republican congressmen and senators like Kevin McCarthy, Ted Cruz, and Josh Hawley—to name those who have been the most servile to the greatest foe of the constitution in living memory—were incapable of putting in a word for the integrity and nobility of American government.

The notion that America is meant to be immune to this mobbishness is understandable, of course, but it is not excusable—the founders of the republic, steeped in the truths of history and human nature, warned succeeding generations to remain vigilant. More than half a century later, Lincoln did, too. History should have taught us that the mob instinct is never banished for good. The danger presented by the Republican mob-cum-party to deliberative democracy is unparalleled in our time, and it has threatened the inheritance of American constitutional government twice over. First, by assisting a crooked thug maniac at the very heart of the American state to begin with, and then sitting idly by as he stoked a foolish and fanatical mob to storm a citadel of American liberty.

Trump is now the first president to have been impeached twice for committing high crimes and misdemeanors while in office. To ensure the perpetuation of our political institutions, a price must be exacted: members of the mob must be prosecuted to the fullest extent of the law and leaders of the mob, in the White House and Congress, must be removed without delay from their offices of public trust. The time is short for our nation to check the excesses and abuses on all sides, and to re-embrace the culture of freedom that offers the only hope of salvaging a democratic republic before the transition to a very different kind is complete.