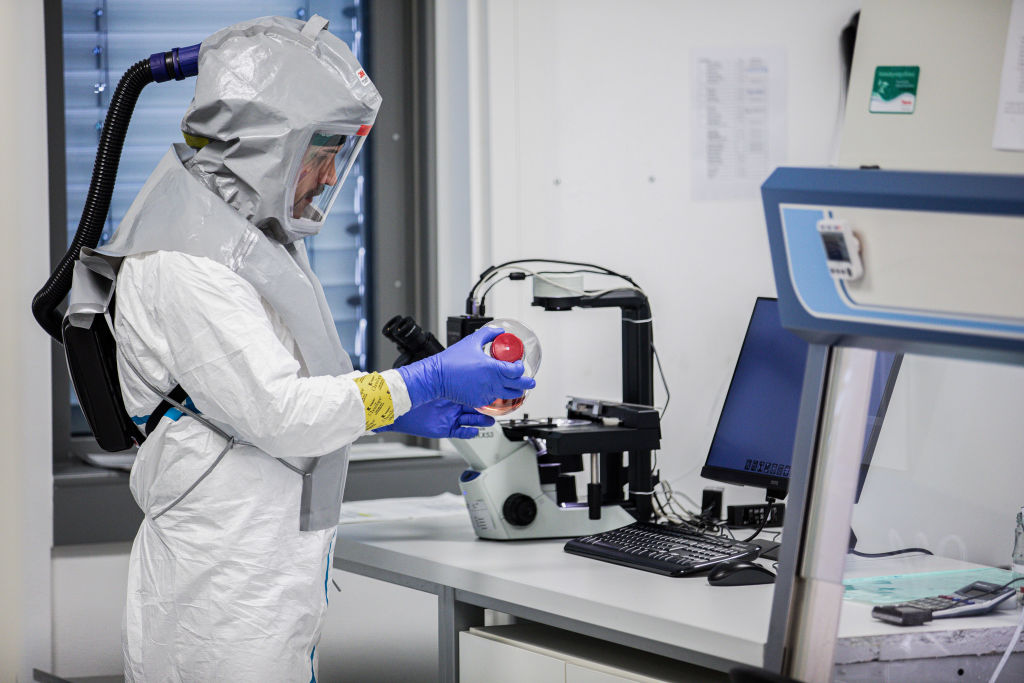 With COVID-19 cases surging in the United States and many other countries, Monday’s announcement that ongoing vaccine tests had produced positive results comes as much-needed good news. In a placebo-controlled trial of 43,538 subjects, a vaccine developed by Pfizer, working with the German company BioNTech, was found to be “more than 90% effective in preventing COVID-19 in participants without evidence of prior SARS-CoV-2 infection.” (Although the early work was done in Germany, by Dr. Ugur Sahin and Dr. Özlem Türeci, the BioNTech co-founders, subsequent development work has been performed collaboratively with Pfizer, which is why it is commonly referred to in the media simply as the Pfizer vaccine.)

Pfizer officials added that they “will continue to collect further data as the trial continues to enroll for a final analysis planned when a total of 164 confirmed COVID-19 cases have accrued”; that the monitoring committee had “not reported any serious safety concerns”; and that “based on current projections, we expect to produce globally up to 50 million vaccine doses in 2020 and up to 1.3 billion doses in 2021.”

It is a sign that the end of the global pandemic may—may—soon be in sight. But there is much we still don’t know, not only about Pfizer’s vaccine, but about other vaccines in development (the World Health Organization (WHO) lists no fewer than 47 “candidate vaccines in clinical evaluation”) and how they will ultimately be deployed.

There has been consensus in the scientific community that, notwithstanding the partial effectiveness of lockdowns, other non-pharmacologic interventions, and potential therapeutics, the development and production of a safe and effective vaccine would eventually be necessary to fully control this pandemic. But it is important to remember that some viruses resist vaccine treatment (as so far has been the case with HIV). In other cases, vaccines are developed, but only after many years of research, testing, and regulatory protocols. Attempts to produce vaccines for the two other known human coronavirus diseases—SARS, which was identified in 2002, and MERS, in 2012—were unsuccessful. So optimism has been appropriately muted in the case of COVID-19. And it’s in this context that these preliminary results are so remarkable.

Specifically, the indication of 90 percent efficacy in preventing symptomatic disease markedly exceeded the 50 percent bar set by the FDA for this vaccine. Secondly, since all other vaccines in development, including at least 10 currently in phase three trials, are designed to block the same viral target—its spike protein—it is quite likely that BNT162b2 won’t be the only candidate vaccine that proves efficacious, though details will surely vary. (The spike protein interacts with our own cells, facilitating infection. And so an immune system that is conditioned to recognize the spike protein, whether through a vaccine or otherwise, is an appropriate target for purposes of blocking infection.) Though it’s still early days, this unprecedented worldwide effort to discover and develop a safe and effective COVID-19 vaccine would seem to validate the efficacy of our modern bioscience research ecosystem.

As Pfizer and BioNTech clearly note in their bare bones press release, their results are preliminary, and they have not yet submitted data from their full phase three trial for scientific peer review. Only when that happens will the global scientific community be able to evaluate the Pfizer/BioNTech results in a full and transparent way.

Moreover, what does it mean that, as the companies report, their vaccine candidate provides “protection… 28 days after the initiation of the vaccination, which consists of a 2-dose schedule”? In July, Pfizer announced that “the primary efficacy analysis” would be based on “the number of participants with symptomatic COVID-19 disease” (my emphasis). The information we have doesn’t reveal whether asymptomatic infection is also prevented, or whether the severity of symptoms in infected individuals is reduced. Nor does it tell us the duration of protection, or whether specific subgroups, such as the aged, children, or those with other medical conditions, are protected.

Many vaccines have side effects. Although the early BNT162b2 trials indicated no important safety concerns, many safety issues manifest themselves only later in the testing regiment, or after a vaccine is administered to much larger populations—on the order of millions instead of just tens of thousands. (Guillain-Barré syndrome, a rare but deadly condition, has been reported as afflicting about one per million recipients of certain flu vaccines, for instance). For a disease such as COVID-19, which is asymptomatic or mild in the case of younger and healthier patients, even a low risk of severe side effects would serve as an impediment to acceptance by many.

There is also the matter of logistics. The Pfizer vaccine, as with Moderna’s effort (designated as mRNA-1273), is based on a novel mRNA technology, which although highly promising, has yet to produce any approved vaccine or other therapeutic agent (though Moderna stresses that it already has demonstrated mRNA’s “potential in vaccines across more than 1,000 subjects in [other] clinical trials, [including] successful early-stage… clinical trials against five other respiratory viruses”). One challenge associated with the Pfizer vaccine is that it requires a “cold chain” for distribution. According to one report, BNT162b2 “needs to be held in storage at -94° Fahrenheit, and will last for only 24 hours at refrigerated temps between 35.6° and 46.4°.”

This logistical complexity is compounded by the fact that, in the case of both BNT162b2 and mRNA-1273, the vaccine treatments require two doses spaced several weeks apart. (The same is true for almost all the vaccine candidates listed by the WHO—though several, such as one being developed by Johnson & Johnson, require only one dose, and apparently don’t require cold storage.)

Recognizing the severity of the global pandemic, many government entities, philanthropies, and health companies took steps to accelerate production of vaccines before efficacy could be established, contrary to usual procedures. In the United States, for instance, Operation Warp Speed (OWS) was established with the goal of producing and delivering 300 million vaccine doses by January 2021 (a deadline that won’t be met, of course). OWS didn’t fund the Pfizer work, but did establish an advance-purchase agreement for 100 million doses, with a commitment of $1.95 billion, and an option to purchase 400 million additional doses. Some of these doses will likely be available by the end of 2020, assuming the FDA exercises its Emergency Use Authorization (EUA) powers, though most would likely not be available until well into 2021. Given the immense world-wide need, the most successful strategy may require supply sources from different vaccines, as the total demand will surpass the production capacity of any one entity.

Even if—and when—all of the above-listed technical hurdles are dealt with, governments would still have to deal with vexing policy questions, such as how vaccine distribution would be prioritized. Many experts agree that the initial doses should be offered to (1) healthcare workers, (2) older individuals, especially those in long-term care homes, and (3) those with risk factors such as obesity and diabetes. Another question is how distribution should be prioritized in light of higher risks of infection and mortality in disadvantaged racial communities.

Then there is the issue of whether a substantial amount of the citizenry will refuse to take a vaccine once it becomes widely available, even if it is shown to be effective and safe. Pseudoscientific anti-vaccine movements have remained influential in many countries, even before COVID-19 struck. And the politicization of the health response to the pandemic—which in some cases has been exacerbated by false or retracted studies—may spark distrust in any emerging vaccination regime. Worryingly, the proportion of Americans who say that they would get vaccinated against COVID-19 as soon as possible has been dropping even as the US death toll approaches a quarter-million.

In this respect, it has not been helpful that the pandemic has unfolded against the backdrop of a strenuously contested American election—and, in particular, the re-election campaign of an erratic and often scientifically ignorant president who has cast doubt on the role of doctors and infectious-disease specialists (including those working within his own administration). A second, more deeply rooted issue relates specifically to minority and black communities, and their experience with racist health initiatives such as the Tuskegee syphilis studies. To maximize the public-health benefit from any nationwide vaccination campaign, trust will have to be built within these political subcultures.

In the short-term, the current surge is worrying, with new U.S. cases now approaching one million per week. Even under the best-case scenario, vaccines won’t arrive fast enough to prevent many of these people from dying. And so Americans shouldn’t take this week’s news from Pfizer as an excuse to shirk social distancing, masks, and other interventions.

Just the opposite: the good news on the vaccine front provides one more reason to exercise caution and avoid fatalism, since it suggests that there might be a viable long-term alternative to endless lockdowns and other public-health measures. Simply put: by being careful now, you can increase your chance of staying alive long enough to benefit from a vaccine.

Jeffrey S. Flier, M.D. is Harvard University Distinguished Service Professor, and Higginson Professor of Medicine and Neurobiology. He is a former dean of Harvard Medical School. He tweets at @jflier.