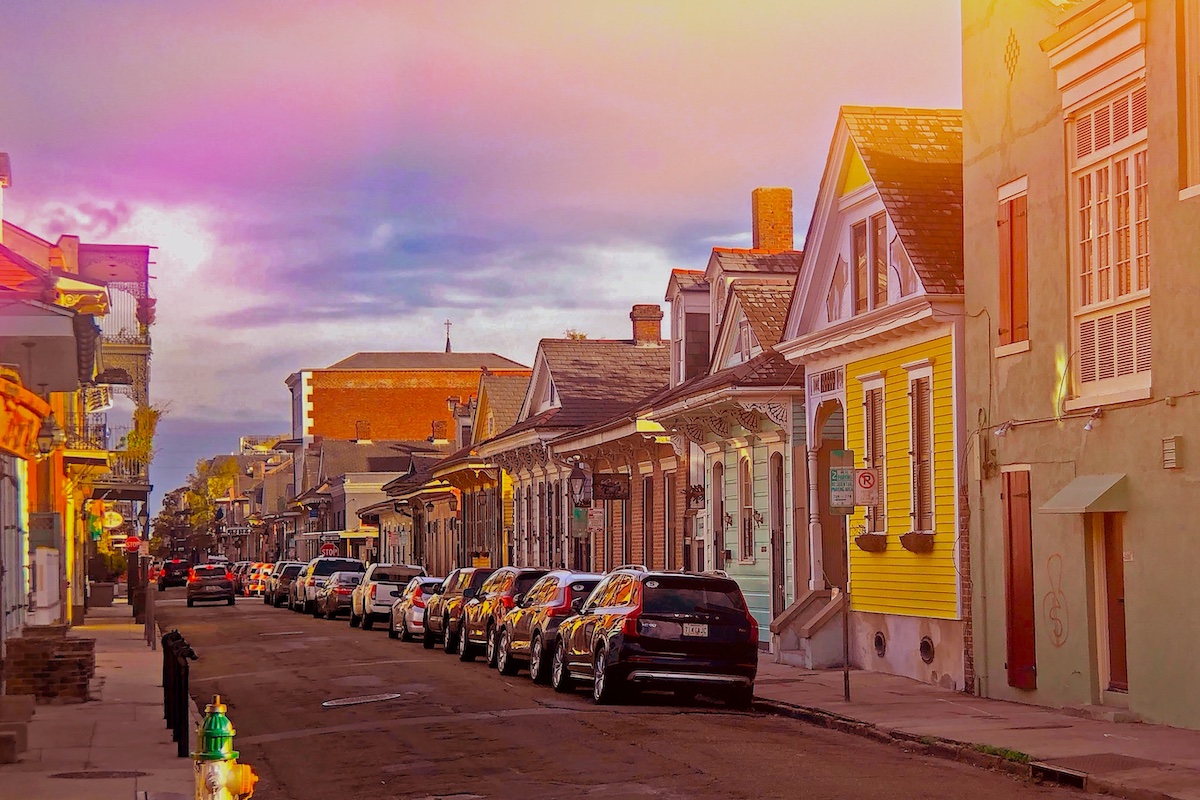 The day after the election, the weather is perfect in New Orleans. The street cleaners have scrubbed Bourbon and the street is looking new and wet. Two older white women stop me to ask if there are any daiquiri places open.

The gates are locked at Armstrong Park, so I bicycle down to the river. There are a few people walking near the water. I sit near the boats that have been docked since the outbreak in March, determined to stay away from home for as long as I can hold out.

I just got back a couple days ago. I’d been on the campaign trail, interviewing Trump supporters in Arizona and Pennsylvania, my first writing assignment in years. But now I was back to my regular work, trying to make the ends meet.

This morning, a washing machine went out. The cleaning lady working on the house next door said she wasn’t feeling well. She’s seven months pregnant and kept holding her belly. I asked if I could help with anything. She said no. It was just the baby was keeping her up at night and her husband couldn’t sleep, watching the returns come in.

She’s Brazilian. I’ve never met her husband. Sometimes she asks me if I have a girlfriend and I laugh and say she wouldn’t understand. “He voted for Trump,” she said of her husband. “I like Trump, too. For the economy.” The way she said it made me think that she thought I was a Trump supporter, just as I had assumed she was a Biden supporter. We were so wrong about each other, but still I liked her very much.

I felt so angry, bicycling through the city. I thought some exercise would help, but it never does. Another one of those myths that we all accept as true. Actually, when I’m alone with my thoughts, if I’m not careful, they start racing, and soon I’m breathing heavy and I start to feel like I have to go, I have to do something drastic, I need sudden change. Anything, anything is better than right now. But I’ve learned from experience this feeling will pass. Which is why I settle beneath a tree on a bench at the river catching the sun sparkle on the water, the traffic on the bridge crossing from the city into Algiers.

The other side of the river, Algiers Point, the second oldest neighborhood in New Orleans. Originally founded in 1719 as a fort to protect the New Orleans Mission, what’s now known as the French Quarter. People say when Algiers floods that’s when we will know it is finally over. “Never happen,” some people say. People who live there don’t even buy flood insurance. It’s surreal in its beauty. All the old houses without any of the tourists, sitting on a strategic point founded only because of the way we used to fight wars.

My friend Mike, a Trump supporter, sold his house recently. Yesterday he went to the bank and tried to cash a check for $50,000. The bank didn’t have the money on hand.

“Don’t worry about it brah,” he said. He was getting ready in case things went sideways. If they did, I would move in with him.

Mike lives off the grid. He doesn’t trust the system. He’s self-sufficient and knows how to fix things. I live off loans, always trying to make six percent from three percent, a small-time hustler. I’m not very good at any of these games.

One of the things I was thinking about, sitting by the river, was how to get enough money together to make it until my next loan came through. What would I have to sell to keep my account from dropping below zero? How many points would it cost to stay afloat a little while longer?

Meanwhile, Mike was preparing for the revolution, stuffing bills in a cast iron box hidden in a yard somewhere. He’d sit in front of his house with a shotgun in his lap, eager for the confrontation to find him.

My time by the river was running out. I needed to get back to work. They were still counting the votes, but apparently Trump was going to lose, and the Republicans would hold the Senate. If the situation remained relatively stable, the virus would ransack the country over the next few months while Trump enjoyed a lame-duck session like Timothy Leary on his first acid trip, plundering the presidency and stoking divisions. Out of any possible reason for giving a fuck, he’d try to fire everyone, from the FBI Director, to Dr. Fauci, to Dr. Birx, to the Secretary of Defense. And he’d pardon anyone left who had committed crimes on his behalf.

After two hours by the water, I felt a lot better. I’d solved none of my problems.

The second day after the election, my friend Jackie asked what I thought. He’s another guy I work with, fixing up houses. All the contractors I know seem to be Trump supporters. I’m sure it’s different in cities north of the Mason-Dixon, but not here.

Jackie said Trump was going to win. There were too many stolen ballots. People wouldn’t stand for it. Trump would definitely be president. I’d been trying not to follow the news but failed miserably.

“Do you want to wager on it?” I asked Jackie. He was one of the few people I knew who was more consistently wrong than I was.

He said he wished he had some money. He said he would bet a thousand dollars.

I said I wished he had some money, too, so I could take it.

I left Jackie at the work site. I was having breakfast outside when JT drove up and went into the café. Surely she saw me. And I thought, I should come to this café every day.

I thought, Eichmann also loved his children. I thought, Nietzsche had something to say about morality and power. I thought of the ocean. I thought of how Sichan looked in the stretch dress she’d worn on our last day together. I’ll go back to Los Angeles, I thought. I’ll stay by the ocean again. I’ll see Alexa, and I’ll swim, and I’ll see Sichan. And then I’ll fly back to New Orleans.

I could afford it somehow. I’d rent my car, and my apartment. Get out of town. Nobody knows who the president is right now. I looked at the boarded-up building on the other side of the street.

It’s difficult. All of life, you have to work. You work for yourself or you work for someone else, and either way the tradeoffs are enormous. Like, when you’re a tenant and you can’t pay your rent, but you can squat for a while. And the landlord has to eat the cost, but they have the benefit of owning the property. Historically, they’ll win, but for a little while they have to worry about not making payments and losing what they have, whereas the one who has nothing never has those considerations.

I looked at her grey station wagon. I guess this is where she goes in the morning to write her books. My car was vandalized when I moved here permanently a couple of years ago. Someone spray painted “rapist” on all four sides. Someone spray painted “SCUM” on the front of my house. JT had allied herself with those people. Modified her beliefs, if she had any, to fit in with the group, which validated her ambitions.

How many people had lost their work or their reputations over false or exaggerated charges, anonymous allegations? People like JT could tell themselves it wasn’t their fault, they hadn’t levelled the false accusations themselves. They were participating in a movement, is all, trying to even things out and make the world a better place. They avoided the wrong people, former friends carrying scarlet letters, anyone who wasn’t enthusiastic enough about the cause. If the Democrats wanted to know why they didn’t do better, they didn’t have far to look.

There is a lot of talk right now about how our country is ruled by a minority, but direct democracy is the mob. Direct democracy cannot be controlled. There are times when the majority loses its mind and they set upon one another like cannibals.

Maybe what was going on right now was best for the country. If Donald Trump had won, the Left would have burned down the cities. If Joe Biden had won decisively and flipped the Senate, conservatives would have loaded the guns into their pickup trucks and laid siege. Maybe I would have confronted JT, pointed out that she’d really let herself go. But instead, everyone got a little something. And everyone was a little disappointed.

Already the Left was blaming the Cubans, who were no longer to be considered people of color. The Right made gains with every group except white people. There were calls to hold people accountable, but it didn’t seem likely to go anywhere. The president was saying all the wrong things and there would be no reconciliation, but there would also be no riots, for the moment, except perhaps in Portland, where they had accepted the destruction the way Hazel, in the movie Synecdoche, New York, accepts moving into a house on fire.

“It’s a big decision,” the realtor responds, “How one prefers to die.”

By the time I was done with my sandwich, I was glad to be going back to work. If we’re going to do better, we’ll have to want better for each other. I hoped JT did fine with whatever was her life now, too.