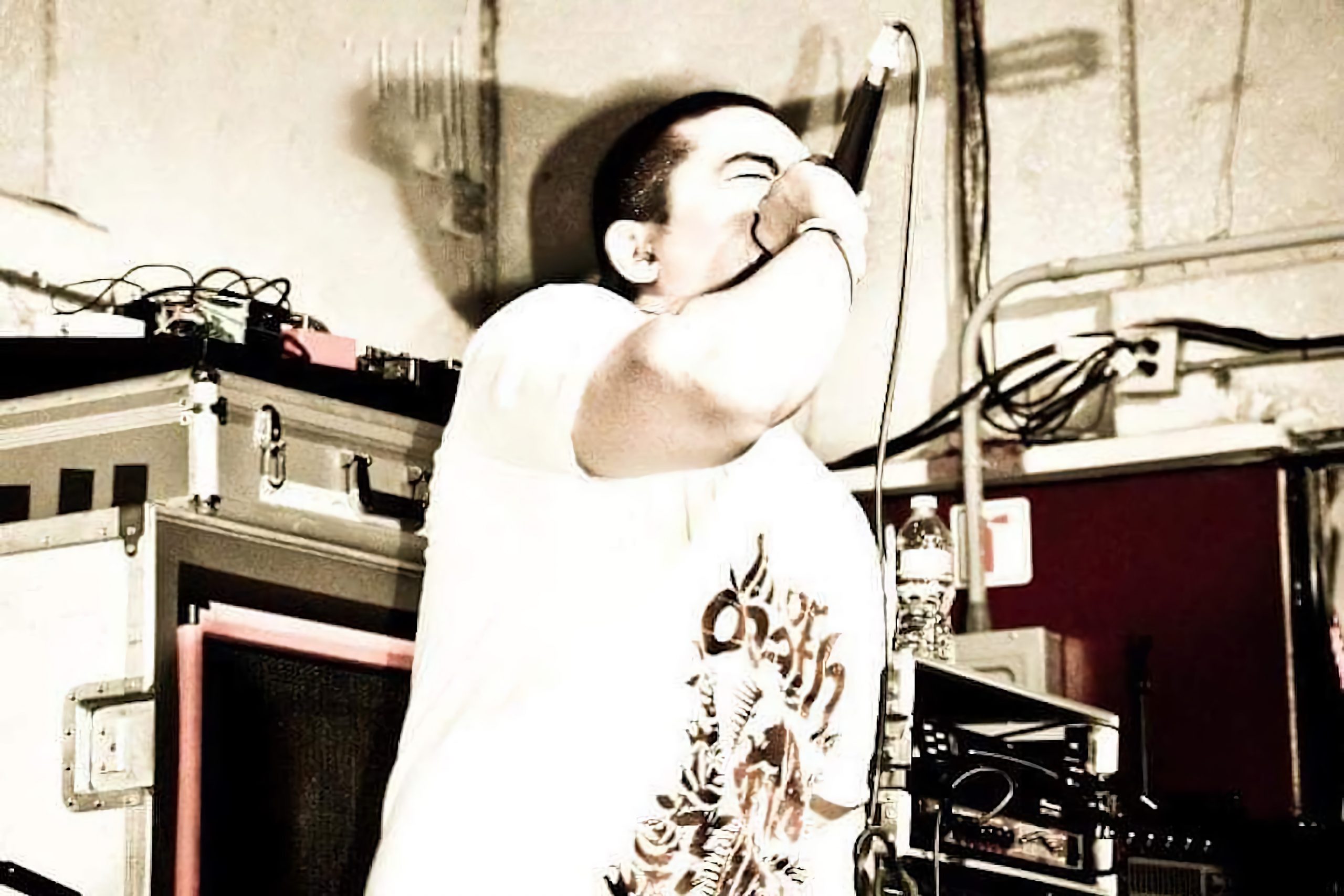 I was born in 1986, the year of release for the first movie I ever saw, David Cronenberg’s The Fly. I was raised in a middle-class, mixed-race family, in the suburbs of Riverside County, California, surrounded by heavy metal, violent cartoons, and children’s programming like Goosebumps and Are You Afraid of the Dark?—all of which warned me that the world I was entering was a wild, nasty place.

I also grew up watching Married with Children, sitting on the couch with my father, emulating Al Bundy’s signature pose. Another message I got: Middle-class American life is a nightmare. It’s a vicious trap for suckers too stupid to be successful or too scared to be vagabonds. George Carlin, N.W.A., Black Flag. Everywhere I looked, it seemed all of the cool people had the same message. The American Dream is a sham. You’re better than that.

Kurt Cobain, Tupac, Biggie, and River Phoenix showed a generation of suburban boys our nihilistic path. We were too clever for the assembly lines, too principled for Wall Street, too vulgar for academia. Find glory or die, because this middle space of strip malls and mortgages is worse than death.

So we did what we could, and tried to find a purpose in a world that seemed more excited about a new Olive Garden than teaching us how to be good men. We formed bands, wrote novels, filmed movies, painted, wrestled, took up mixed-martial arts, skateboarded, all in an effort to find something that felt like life.

In the mid-2000s, it seemed to be working out alright, for a while at least. I lived a town away from a band that would become icons of a new death-metal subgenre. We would congregate at Denny’s after small gigs at Corona, CA’s (now closed) Showcase Theatre, laughing as the vocalist grunted into the microphone behind the host’s desk.

The band was Suicide Silence. The front man, Mitch Lucker, born two years before me, followed in the path set out by our anti-heroes. He died in a motorcycle accident at age 28. The brightest star of my peers, the man touring the globe in a famous band, living our childhood dreams—he vanished.

In 2020, Mitch and the Showcase are ghostly memories of a generation whose ethos seems to have vanished, too. Many of its old followers chose traditionalism or progressive radicalism rather than sticking with what I felt us boys were always about—that fatalistic Emersonian notion of Self-Reliance, being who you are until it gets you killed.

As Ralph Waldo Emerson said, “If I know your sect, I anticipate your argument.” In my formative years, the last thing any of us wanted was to be “anticipated.” “You don’t know me,” was a common phrase repeated over and over as blood stained the blue-lit parking lot outside the Showcase-adjacent 99 Cent store. In the first decade of the aughts, men, and sometimes women, got into fistfights in this part of suburban California if someone felt their individuality had been violated or disrespected.

In 2011, a year before Mitch died, the Baltimore hardcore band Trapped Under Ice put it perfectly in their masterpiece Big Kiss Goodnight: “I can’t believe how stupid you must be/ To follow everything that you read, hear, and see/ You could never walk the path that I walk/ You’re too afraid of the risk involved.” That was the message I’d sensed my whole life, crystallized into a few seconds of music. Think for yourself, follow no man or ideology. And in the chorus: “You shake my hand/ Say ‘Pleased to meet you’/ Look me in the eye/ I don’t believe you.”

This was the source of all our young rage: corporate culture, this idea that to succeed you had to fall in line, put on a uniform, and pretend to be happy, that your lips had craved an ass to kiss since they emerged from the womb. We all shared a common disdain for the dehumanizing economic machine set to absorb us. We were average young suburbanites struggling to make a living at mindless service and factory work. For many, death really did seem preferable.

My own band was called The Black Path. In our song Accomplice, I described the feeling of “Moving from check to check/ with a handprint on my neck.” Aspiring to transcend the system, we were living in a kind of economic limbo, choosing low-paying, low-responsibility work that allowed us time off to rehearse, record, and tour. I worked for seven years at Pizza Hut, baking greasy pies during the day, screaming about how much I hated it in warehouses by night, sometimes still wearing my uniform, exorcising the pizza grease and alcohol from my pores in a shared ritual with a room full of like-minded wrecks. I never meant for our lyrics to be anti-capitalist, or pro-communist. There was no -ist to attach to this feeling. It was simply a recognition that this is our state, and it’s killing us.

To follow the American Dream was to be a docile, mewling sheep. What was the point? Become a teacher in an education system that taught students to be good prisoners? Join the military and fight in wars that were so clearly bullshit? Become a police officer and become the people who enforce drug laws and shut down our own hardcore shows for noise violations?

So I shuffled on, too stubborn to find a real career, attending phlebotomy school at a small college in Orange County that would close a year after I graduated, flailing to find some use for myself as my dreams of an artist’s life dimmed. As the years passed, and our passions softened with age, my band dissolved. Everyone moved on. Some went on to pursue that normal life we all pretended was death. The rest of us became resigned to that stereotypical self-loathing existence of many an elder millennial hardcore kid: living with parents, working menial jobs, writing and playing music at night, dreaming of success that grows fainter by the day, growing bitter as you see younger, less-talented, less-original, less-everything people rise up the ranks. Remembering the good old days, when you took no shit, and it seemed like your white-knuckled fist would never loosen its grip from the world’s balls.

Suicide—the name of Mitch’s band—is a topic I’ve been intimate with from a young age. My best friend told me he was suicidal when he was 11 years old. Soon after, I began to feel something similar. Whatever strange, pasteurized version of reality we were being molded to thrive in seemed unlivable.

That best friend—my suicidal ally, my confidant in all of my most morbid and ugly thoughts, a man who had once held up his jacket to show the Narcoleptic Youth patch to Joey Bondage as he passed on the freeway—he had a younger brother. He was a boy I’d slept beside after many long nights spent watching Italian giallos, a boy I’d shared colors with on the Temescal Canyon High School wrestling team, a boy I’d known since he was nine years old, a sweet, affable soul, a good-natured marijuana enthusiast, a greasy-haired punk, and, in 2018, a suicide. The circumstances were complicated—as with most suicides. I wish to point zero fingers of blame. It was a horrible thing. It happened, and that is all.

In a 2014 song called Clamshells, I tried to describe the trap of nostalgia that seemed to be my generation’s only true soma. “We bleed a lot, but we heal/ We ain’t got a lot, but we get to be real/ Been living at the house, all our young lives/ Nowhere to go, but we still got a drive/ And gasoline ain’t an issue, we can drive all night till momma miss you/ Just another cruise on a cold afternoon/ Who woulda knew that we’d never beat the view?”

Now, years later, with too many dead friends, too many sad stories of brilliant men amber-locked in ennui, as the world seems to be collapsing around us, I wonder: Is this our fate? To fade away as young antiques, living silent lives, working in retail, hospitals, and restaurants? Was our obsession with individualism a poison of privileged middle-class lives, some naive idealism we clung to for meaning? Should we have shut up, fallen in line, been grateful for the opportunities we had that so many others lacked? Are we actually just lazy, entitled brats who should’ve worked within the system to make the changes we seek? Maybe. I don’t know.

I’m no scholar. I went to community college, then state schools, in an effort to find some way to earn a living that wouldn’t end in my suicide. I earned a degree in English I’m still struggling to find a use for. I perform stand-up comedy, write music and fiction to maintain my sanity. I work as a delivery driver in the gig economy, a job that affords me the freedom to spend my days alone in the company of audiobooks and the music of my youth, whittling away the long socially-distant days, drowning in nostalgia as a coping mechanism to fight loneliness and rage.

Despite our broken spirits, I see little evidence of groveling or pity-seeking among the men I consider my peers. I didn’t write this to make excuses or attract sympathy. But it would be foolish to witness so much suffering without trying to make sense of how we got here. Still, I have no answers. This is simply my story.

We are a generation of smart, strong, caring, conscientious men, full of kinetic energy that I now see dispersed through alcoholism, drug abuse, depression, anxiety, violence, and death. I love America. I love this land that birthed the artists whose works give me life. This is the country that molded all of my sick, glorious heroes and friends. I don’t want to see it torn apart. But the anger, this rage I’ve seen growing among youth, I do understand it. Among all the things in this world that have baffled me since I can remember, anger might be the one thing I understand.

I will hold fast to self-reliance until my hands are cold and my heart is lifeless meat. I will honor the memories of fallen brothers. And for others, this is my plea: Our problems are complicated, so don’t fall under the sway of ideologues who offer answers that are simple. You know better than that. Be who you choose to be, be beautiful, be yourself. No one has magical access to sacred knowledge, religious or secular, that can save you. Only death is real.

Matthew Amos is a writer and musician based in Boise, Idaho. He can be contacted at matthew.jordan.amos@gmail.com.

Featured image: The author, performing in 2012.