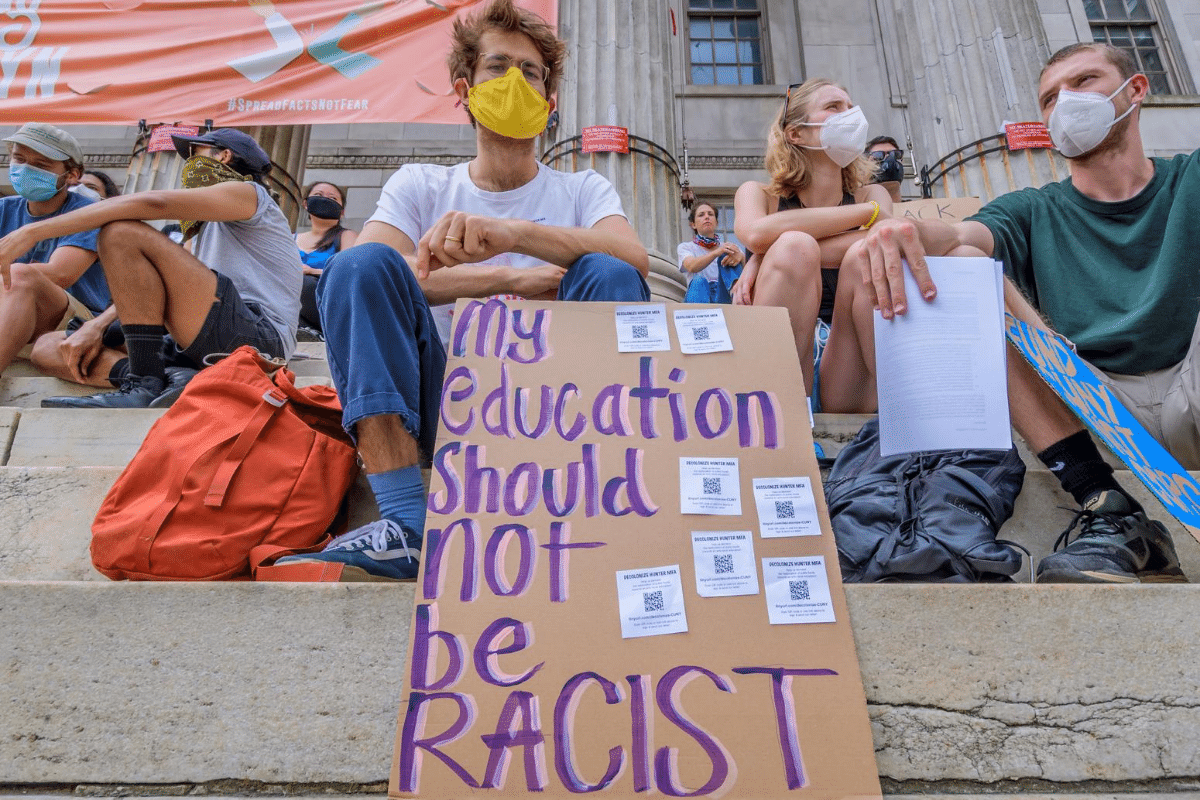 According to a 2019 Cato Institute study, 75 percent of immigrants who are American citizens are very proud to be American compared to only 69 percent of native-born Americans. Based on my own experience, I expect the discrepancy to be much greater if you compare the sentiments of all immigrants to those of American-born elites, especially the young.

I escaped communist Romania in 1975 and came to the US to pursue my dream—attracted to the United States, as millions of other immigrants have been, by its reputation as a country that values freedom and rewards hard work and talent. I came with nothing but a strong desire to become a research mathematician, yet have been able to succeed far beyond my expectations. This is the result partly of my own efforts and whatever talent I may have, but a larger part of the credit is due to the sheer good fortune of being able to pursue my career in the US within an academic system which has been, at least until today, the freest, most competitive, and fairest in the world. By “fair” I mean the remarkable ability of this system to reward talent and hard work, with absolutely no regard for ethnicity, religion, race, sex, age, or any other considerations.

All this, however, is now in question. American colleges and universities, as well as many other institutions, are under attack by an ideology that I cannot but describe as insidious. This ideology is built on a combination of “critical theory” (an offspring of Marxism); a weird type of moral-cultural relativism that generates its own opposite, namely, fierce moralistic dogmatism; deconstructionism; and intersectionality. The net result of this stew is to view people as irredeemably divided by race, sex, sexual preferences, etc. into grievance groups, all suffering under various forms of oppression. Having evolved from this noxious mixture of implausible but influential academic theories, the ideology has succeeded in taking over many departments in the humanities and social sciences and is now making inroads into the sciences. By an extraordinary stealth quality, it has continued to move, largely undetected until now, into society at large, producing the “Woke” phenomenon.

In the worldview of the Woke, America has never been that paragon of freedom, justice, and opportunities for all that attracted us immigrants, but rather a terribly unjust, racist, and corrupt society. Its foundation does not begin with the Declaration of Independence and the Constitution that we proud and patriotic immigrants venerate, but rather, as the New York Times tells us in its 1619 Project, with the date when the first slaves were brought to these shores. American history is no longer taught dialectically, as a constant struggle for improvements made possible by the magnificent founding principles and institutions of the republic, but, rather, statically as a mindless sequence of acts of oppression against various groups. In fact, the founding documents are themselves often deemed to be racist and sexist, as are the historic figures who wrote them. Woke ideology is thus destroying the very foundations on which the American democratic republic was built. By manipulating historical data and misinterpreting current events, it is sowing resentment and self-doubt. Worst of all, it divides us into groups (“oppressors” and “oppressed”) who are at war with each other, thus grievously undermining the national motto “e pluribus unum” and the very concept of American citizenship based on a shared commitment to universal values.

I see this confusion at work in my own university, Princeton. Although there are faculty members and students who resolutely resist Woke ideology, the leaders of our university have been confronted with “demands” for quotas, a core distribution requirement focused on the history and legacy of racism in the country and on the campus, and even a faculty committee to “investigat[e] and discipline racist behaviors, incidents, research, and publication on the part of faculty.” All this, despite the absence of any visible institutional form of racial discrimination on campus (though there are persistent claims of barely concealed discrimination against “overrepresented minorities,” especially Asian Americans) and with no regard for the potentially destructive effect of such measures. Princeton, as well as most similar US academic institutions, are constantly on the defensive, making great efforts to correct a racism that they themselves know does not exist, as a way of covering themselves against ever expanding accusations of racism. Paradoxically, these institutions are thus fighting the ghost of racism in their middle by abetting the racialist agenda of their accusers.

Nothing I say here is new, and merely lamenting what is going on is no longer appropriate to the gravity of the situation. We are facing something we did not seek and by no means welcome, namely, the moral equivalent of war. This has been clear to the aggressors in the struggle from the beginning. They embraced it in a revolutionary spirit and as a quest for power. Those of us who want nothing more than to preserve traditional ideals of academic freedom, integrity, and civility have been reluctant—and therefore slow—to acknowledge it. Here is a call to action. It should sound familiar except maybe to those who have recently defaced a certain statue in London’s Parliament Square.

We shall have to fight even more fiercely than the British in the last World War because, while they could hope that America would come to their aid, we have no such hope of reinforcements being sent from abroad. Our weapons in this war of ideas are simply the belief in the old ideals of the American revolution: equality under the law, our freedoms enshrined in the Bill of Rights, the power of reason and reasoned debate, the scientific method. We academics and educators are facing an uphill battle to reverse the decay of our most badly compromised institutions, schools and universities. We should utterly reject the centerpiece of our adversary’s ideology—the notion that our society is irredeemably racist. This accusation is no longer defined “in terms of recognizable discriminatory actions (which could be identified, measured, and cured) but rather as any manifestation of disparate or unequal outcomes. Differences of any kind—whether in income, education, or life expectancy—are all defined as manifestations of systemic racial animus.”

Woke ideologues are using this notion of structural racism and the justifiable American sense of guilt for the past treatment of our African American citizens as a club to demolish our institutions. By contrast, our banner should be the simple and powerful anti-racist and anti-racialist message of Martin Luther King, Jr.: Judge all humans not by the color of their skin but by the content of their character.

We should reject any attempts from the Right or the Left to politicize our fight, even as we should attempt to form a broad coalition of conservatives, traditional liberals, and civil libertarian progressives supported by our immigrant citizens. Furthermore, we must strive to have members of our most disadvantaged minority groups join us by unmasking the fake promises of the Woke, which may seem well intended but are ultimately destructive to the very groups they claim to champion. We must insist on education as the key to success, and stress that Martin Luther King, Jr.’s “promissory note” will continue to be honored within the framework of our constitutional system.

Above all, though, we have to stop being frightened, intimidated, and afraid to fight back. No matter how dangerous the present cancel culture is, it offers no match to the reign of terror of Nazism or of Soviet and Chinese Communism. If truly courageous dissidents like Solzhenitsyn and Sakharov could oppose the Soviet system, it behooves every one of us to take on this weaker but insidious form of oppression—before it becomes still worse. As a first step we can start by defending each other based on the principle that a woke attack on one is an attack on all.

Sergiu Klainerman is the Eugene Higgins Professor of Mathematics at Princeton.