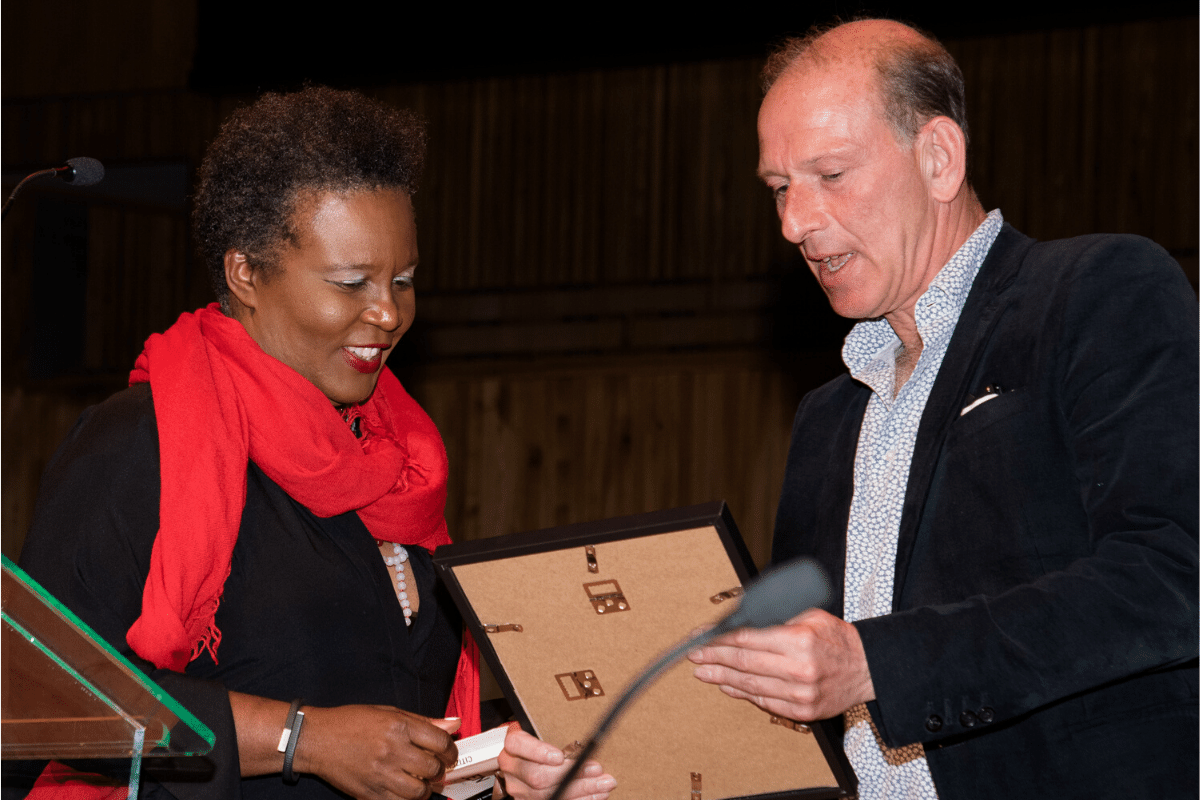 On March 10th, just days before the lockdown would shut down the theater business in New York City (and most other places), I had the opportunity to see the premier of Claudia Rankine’s new play, Help. Based in part on the acclaimed poet’s 2019 New York Times magazine article, I Wanted to Know What White Men Thought About Their Privilege. So I Asked, the play was presented as an “investigation into whiteness.” Given the events that have unfolded since the death of George Floyd, it’s obviously a timely subject. And it’s unfortunate for Rankine and her venue, The Shed in Hudson Yards, that COVID-19 shut down her production until further notice. I know of no other artistic production that better captures the theoretical underpinnings of progressives’ well-intentioned but flawed approach to tearing down “whiteness.”

“Help is a play in which the Narrator inhabits the category of the Black woman in order to be in dialogue with the category of the white man,” Rankine explained in a writer’s note. She is careful to say “category” because the conceit here is that none of the characters are actually humans per se. The lines spoken by the white men on stage were excerpted from responses to her Times article. But Rankine says these men “do not hold any single identity throughout the play, but speak with the many voices and positions expressed in response to the original article.” The purpose, Rankine told her audience, wasn’t to mock these men, but to “create a shared reality. One in which there is agreement not in how to respond but in what we see is happening. If it’s raining, can we all agree it is raining? How we respond to the rain varies, but can we agree the rain is coming down? Can we live in relation to each other within a shared knowing?”

The setting is an airport, where the narrator speaks to white, male business-class travelers about their privilege. If they can acknowledge their privilege and continue the conversation, then, according to the narrator, they are morally entitled to their position within the overall “shared reality” that binds us. If, however, they refuse to acknowledge their privilege, the narrator cuts off the conversation—on the logic that if they can’t see their privilege, then they can’t fully see her. The approach is in keeping with the larger rejection of color-blind liberalism that is part and parcel with critical race theory and related academic doctrines. Or as Rankine summarized this explicitly race-centric approach: “If you can’t see race, you can’t see racism.”

“They don’t see me. People will brush right past you, or enter a room with a group and acknowledge everyone but you. And nobody else notices this but me.” – Roslyn Ruff

Read an interview with Roslyn Ruff, who plays the Narrator in “Help”: https://t.co/c9sLb2xeub pic.twitter.com/QvgHzW8jSO

These airport scenes are supposed to show us the path to constructive dialogue about race in America. Instead, they embody a contradiction that has become embedded in all manner of debates about race—whether in academia, politics, or social media: If one side sets preconditions—on what perspectives are allowed to be shared, on who is allowed to say what, on what premises must be embraced—then the claim that this is all about a meeting of the minds, or of accessing some kind of “shared reality,” is falsified. Even many of those who support the uncontroversial idea that white people and men often are more privileged than blacks and women will find it off-putting and disingenuous to demand that debate participants pay homage to such claims before entering the fray. Placing preconditions on debate always serves to connote a moral judgment on those who see the world differently. And while such preconditions may be popular or justified in some cases, their enforcement is a political project that typically inhibits communication rather than facilitate it.

Within the first 15 minutes of the play, a group of 12 white men performs a 1950s-era old-time-y shimmy, then forms into three rows of four and suddenly issues a Sieg Heil salute. The audience gasps at this theatrical homage to Godwin’s Law. But then the narrator cuts in to explain why their surprise is misplaced: “I’m not demonizing, I’m historicizing.” Which is to say: It’s somehow reasonable to associate a group of men who happen to be white with Adolf Hitler’s totalitarian death cult.

Of course, the Nazis justified their mass murder on the racist belief that Jews and other groups didn’t have the moral status of real humans, but were simply specimens of some inferior and sociologically contaminated collective. Rankine is obviously no Nazi. But she does a pretty good job reducing her characters to dehumanized stereotypes, assigning herself license to do so on the claim that “there are no individuals here.” By the end of the play, this conceit rings hollow: While all artists use characters as stand-ins for larger groups and ideas, such devices don’t excuse an artist who treats his or her characters in a blunt or dehumanizing way.

As others have noted, whiteness now has an almost comically loose definition in academic and activist literature, acting as a byword for all that is bad and unjust about the Western world. Those unschooled in this trend may naively protest that identifying evil with skin color is the very definition of racism. (Imagine if the traditions associated with Chinese imperialism and Confucian gerontocracy were lumped in with “Yellowness.”) But the counterarguments to this are by now well-established within critical-race subculture, wherein it is blithely asserted that “whiteness” does not refer to skin color per se, but rather to the more abstract and diffuse habit of toxic thought associated with the historical privileging of white people over others.

Moreover, those who find such explanations unsatisfying, or who rebel more generally against the idea of whiteness as a form of secular original sin, are simply dismissed on the basis that they are suffering from “white fragility.” Yet for an artist, what could signal “fragility” more clearly than an explicit refusal to engage with, or even acknowledge, someone else’s perspective?

Rankine’s own marks of privilege include Guggenheim and MacArthur fellowships. Yet she told an interviewer that her definition of white privilege “is not about economic privilege,” even if economic issues play into it. Rather, “it’s about the ability to live a life without being questioned at every turn… For them, being able to live is taken for granted. And by living, I mean just leaving your house and thinking you can go where you’re going and come back home again.”

There is certainly truth to this. In the play, the narrator asks one man, “have you ever been followed around a department store? Does TSA screen you for entry?” Following the killing of George Floyd, many Black Americans shared stories of being harassed or even brutalized by police officers in situations where white people almost certainly would have remained unmolested. But as the editors of Areo noted in The Progressive Case Against White Privilege, it isn’t necessarily productive to describe this situation in a manner that casts whites as cackling Nazis with their knees on the collective throat of Black America: If someone’s human rights are being violated by rogue police officers or other public servants, that doesn’t mean that the group whose rights are being respected are improper beneficiaries. Rather, it means they’re receiving what should be the standard treatment that is constitutionally guaranteed to every individual. And so the project that emerges from our “shared reality” is one that brings the wronged group up as opposed to tearing down its more privileged counterpart. (Consider that in most parts of the United States, likewise, Americans of East Asian, South Asian, and Jewish heritage have fewer negative interactions with the police than blacks or whites. But this doesn’t mean they exhibit some toxic form of Asian or Jewish privilege. It just means they’re more likely to be treated the way we would all like to be treated.)

On a cultural and historical level, it is definitely true that discriminatory attitudes can manifest in a superficially race-blind way—a classic 20th-century example being the heightened criminal punishment meted out by US federal laws for drugs associated with black communities vis-à-vis white communities. But on a person-to-person level, which is what Help depicts, starting off a conversation with sweeping, non-negotiable declarations is a good way to ensure hostility and misunderstanding.

To Rankine’s credit, Help also explores issues facing white men, especially those in the working class. During a segment of the play focused on the opioid crisis, the white men fall to the ground in a gesture meant to symbolize the tens of thousands of annual opioid-related deaths in the United States (more than two-thirds of which involve male victims). Yet even putting aside the fact that these business travelers are hardly a high-risk group, the scene seems clownish. And it becomes apparent that the point of its inclusion isn’t to provide balance, but as a pretext to attack white male voting patterns. Because white men overwhelmingly voted for Trump, the narrator speculates, “whiteness” is in fact a form of cultural suicide, since those who uphold it would prefer to (literally) die than become part of a socially enlightened (and presumably Democrat-led) struggle to dismantle racial hierarchies while building up society’s safety net.

In the final part of the play, Rankine’s narrator urges us to “swerve” into each other’s lived realities and experiences. “You’re not the only one living in fear. You’re not the only one on top of the world,” the cast sings. I wholly agree with such sentiments. But the demand that we see each other not as individuals but as the sum of ethno-historical forces hardly helps anyone “swerve.” Just the opposite: It encourages viewers to remain fixed in their lanes, mumbling assent to Rankine’s ideological demands.

In the original Times article, Rankine seemed to exhibit self-awareness in regard to the contradictions within her own argument, writing, “As I looked at the man in Seat 2B, I wondered if my historical positioning was turning his humanity into evidence of white male dominance. Are white men overly determined by their skin color in my eyes? Are they being forced, as my friend suggested, to absorb the problems of the world?” These are good questions. But the contents of Help suggest she’s failed to wrestle with them in any kind of productive way.