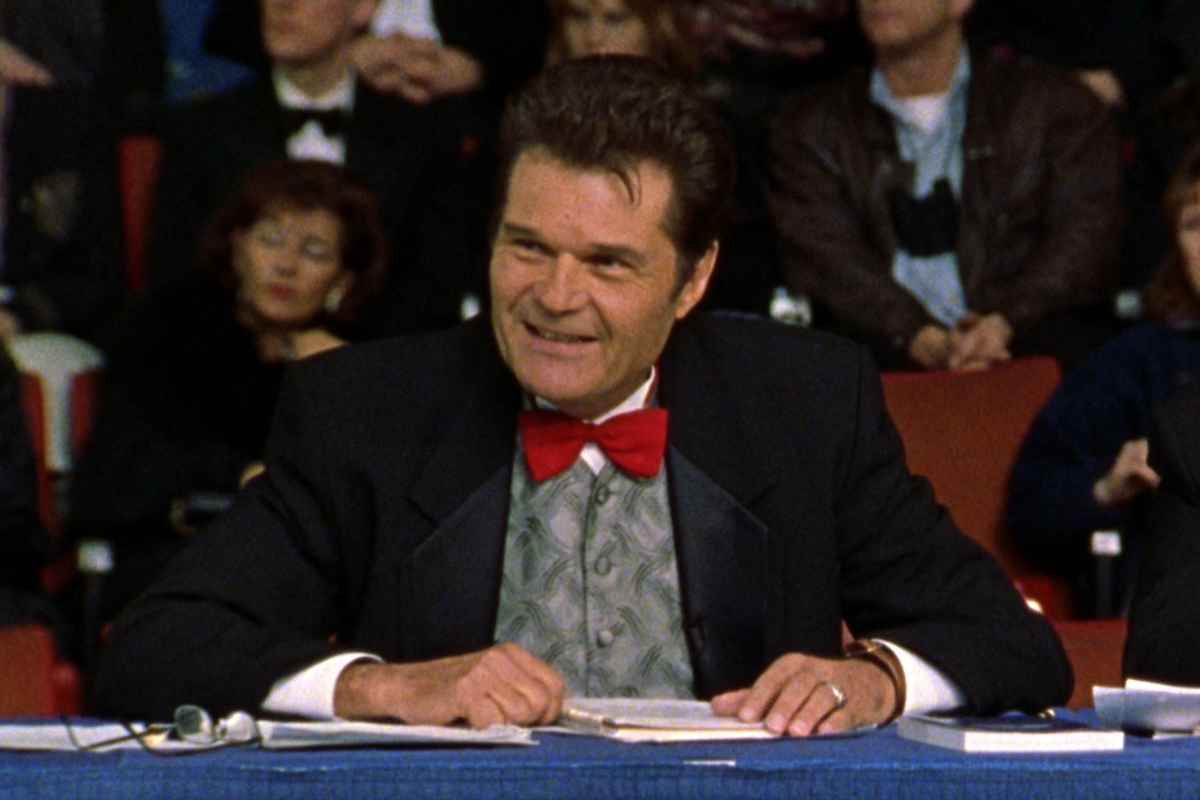 When I recently discovered that Fred Willard had appeared as the ghost of Trump’s father in a skit on Jimmy Kimmel’s TV show, I must admit my heart sank. Not that there’s anything wrong with political satire, of course—traditionally, the comic has played the vital role of a jester whose job it is to send up pomposity and hypocrisy wherever they occur. But in the era of Donald Trump, a distressing number have preferred to simply become mouthpieces for progressive talking points and platitudes. Would Willard fall into this trap? I braced myself for disappointment, but I needn’t have worried. The laugh lines were predictable and the material was as charmlessly partisan as I’d expected, but Willard’s characterisation of Trump senior as a cheerful-but-damned sort of American soul in a Frank Capra three-piece suit effortlessly drained the sketch of whatever spite had animated its conception.

But the Kimmel skits notwithstanding—he also appeared as Trump’s party planner and nickname-maker—Willard rarely concerned himself with fashionable politics. Few things are more dispiriting than much-loved entertainers contorting themselves to appear hip to the cause of the moment. In its own way, this trend is every bit as toe-curling as the previous tendency to despair of the nonsense the young find funny these days, and to lament that “political correctness has ruined everything” and that we don’t still have sitcoms like Mind Your Language on the TV. Willard managed to avoid standing on either of these rakes. He remained elfin even in old age—mischievous, childlike, and a living reminder that, if the clockwork is still ticking under your waistcoat, funny is funny and you really don’t need to “re-invent” yourself or agonise about relevance to get laughs.

Sadly, the Jimmy Kimmel appearances were among Willard’s last. He already looked old and a little frail, and he passed away on May 15th of natural causes at what is thought to have been the age of 86. The morning after his death, his Wikipedia entry read “Frederick Charles Willard (1930s – May 15, 2020),” although this has since been updated to read “(September 8, 1933 – May 15, 2020).” The clarification is somehow disappointing—it was momentarily fitting that an actor many consider to have been the doyen of improv comedy should have his birth listed, not as a date, but as a genre. It won’t be the biggest celebrity death of the year by any means, but for those of us who loved comedy enough to pursue a career in it, and for millions of connoisseurs of the good stuff, his passing is a sad loss.

Willard was a kind of Holy Fool even among fools. His long and graceful career dated back to the 1950s, an era that has long since passed into myth. He performed sketches on The Dean Martin Show and later on The Tonight Show with Johnny Carson. He even made an appearance in a 1967 exploitation film called Teenage Mother as a high school coach who introduces the boys to their attractive Swedish “health education” teacher. But it was his film and TV performances from the mid-1980s onwards that introduced his talents to a wide audience, as he discovered a talent for semi-improvised comedy with which he would make his name. His speciality was performing variations on a kind of blithely oblivious white American male—generous and affectionate parodies that haven’t dated and were not motivated by cruelty, or indeed by anything but fun. In recent years, he was best known to modern families for his appearances in Modern Family—a slick, smart, quasi-fly-on-the-wall sitcom that took a lot of its cues from Willard’s earlier work, and in which he played Frank Dunphy, father of the show’s adorably goofy and congenial family man Phil, who might have easily also been one of Willard’s own screen creations.

But Gen-Xers—members of my generation—will probably remember Willard for his appearances in Christopher Guest’s terrific run of docu-parodies, beginning with the release in 1984 of the deadpan classic This is Spinal Tap. Co-written and directed by Rob Reiner (who also appears as documentarian Marty DiBergi), the film ostensibly trailed the eponymous three-piece British metal band on a shambolic and rapidly disintegrating tour of America. It was at once a satire of a musical form bloated by pretension and bombast (down to the redundant umlaut over the “n”) and of the po-faced music documentary form itself. Such was its cult status that bands like Black Sabbath and Status Quo were eager to claim that they had been the basis for a film that made them look entirely ridiculous.

Willard appears in a brief but famous scene at an Air Force base, at which the band have been booked, somewhat optimistically, to entertain the troops during an “At Ease Weekend.” As the young lieutenant who welcomes and briefs them on what is expected—“The idea is that we can get you on and… get it over with…”—Willard offers an absurd and yet plausible portrait in miniature; ingratiating, impersonally efficient, and cheerfully indifferent to the band’s sullen hostility, peppering the scene with absent-minded asides. It’s like the final 90 seconds of a classic Bob Newhart routine.

This is Spinal Tap began the Willard-Guest partnership but according to Willard’s own account, he hesitated to take the job. It seems he was only vaguely aware of Christopher Guest and not a fan, a close friend, or an established collaborator. And he was, at that moment anyway, weary of being typecast as a stiff authority figure (although he did have significant experience of life on a military base from his childhood to draw upon).

This is a good accompanying video.

It’s strange—alarming even—to think how easily creative connections like that might never have been made. Guest’s other great, semi-improvised mockumentaries—Waiting for Guffman (about the world of independent musical theatre); A Mighty Wind (about the world of folk music) and the rest—would have been significantly diminished without the participation of Fred Willard. His most memorable turn was as a contest judge in Best in Show, a role for which he received a number of awards. It was a marvellous creation.

The eighties were, in hindsight, a golden age for deadpan, especially featuring men old enough to look as if they ought to know better. Leslie Nielsen had already enjoyed a decent career as a matinee idol before his performances in Airplane! and Police Squad! led to the only other Hollywood trilogy that can really live with The Godfather and Toy Story—The Naked Gun. But although Nielsen became a far bigger celebrity than Willard, this led him to drown his legacy in a slew of worthless, clay-footed late period cash-ins, in which he was expected to carry third-rate material.

Willard had a completely different metier—something closer to the mode adopted by the best comedians of the black and white era. Scripts from those years were frequently marked with the direction “Business Here,” which meant that Groucho or Max Miller or whoever it was would fill a gap in the narrative with whatever banter or slapstick was required to take the story to the top of the next page, with no mind paid to the script or the “motivation” of the characters. In the same way, Willard would often step into a film and offer up something so curious and delightful that you’d forget where you were for a while and what was supposed to be happening. Very much like an old-fashioned clown.

I need to be careful here. Barry Cryer famously warned that dissecting a joke is like dissecting a frog—no-one laughs and the frog dies. Dissecting the appeal of a comedian arguably runs a similar risk, and those who already love Willard’s work may resent having its many pleasures explained. Nevertheless, there is something I want to get to about Willard’s gift for film comedy that I’d like to prod with the end of my scalpel. Like Oliver Hardy and John Candy and very few others, he had a face that could make you smile—open, friendly, quite handsome, and not remotely cunning or grotesque. And there was also a lightness, I think. Lightness in art sometimes elicits contempt when it suggests frivolity. But the lightness of Willard’s comedy was not the lightness of banality but the lightness of Japanese calligraphy or of a soap bubble in the sun. He remains the only real live actor to have appeared in a Pixar movie, and even as Shelby Forthright in Wall•E, the CEO of the Buy-N-Large Corporation that has completely screwed up planet Earth, he managed to be quite charming.

On Jimmy Kimmel, Willard reminded me for some reason of Tom Bombadil—a minor figure in The Lord of the Rings who did not make it into the movie. He was the only character in the trilogy so completely at peace with his world that the temptations of the Ring simply ran off him like water. Fred Willard’s screen incarnations had something of that innocent quality. Unlike Tom Bombadil, however, he did not outstay his welcome with unendurable ballads about his young wife. And, unlike Tom, Fred was not immortal. Still, 86—if that figure holds—was a good innings and he was still working when the curtain dropped. That is all any of us dare to hope for.

Simon Evans is a stand-up comic, satirist, writer, and broadcaster. You can follow him on Twitter @TheSimonEvans.