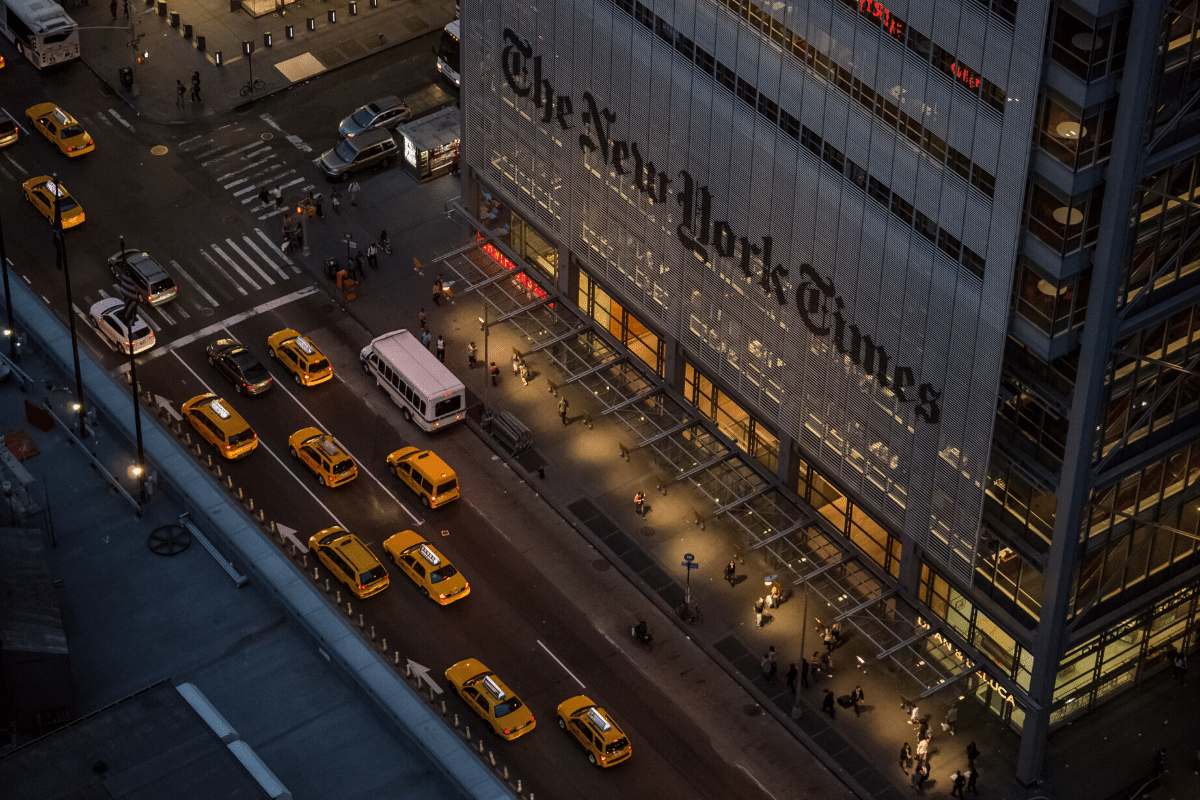 In a recent column entitled “Why the Success of the New York Times May Be Bad News for Journalism,” media columnist Ben Smith outlines a number of anti-competitive practices by his parent company. His conclusion is that the Times may be well on its way to becoming a monopoly. But why does this matter to readers? I’d like to tally some of the problems that might arise from a lack of viable competition in the journalism industry.

To summarize, the New York Times is now a behemoth in the digital news industry, massively outperforming its competitors when it comes to digital subscribers. It poaches the best editors and reporters from other news organizations, swallows their distinctive qualities whole, and now plans to move into the audio industry, with a potential purchase of Serial Productions (a prominent podcast studio that is currently valued at $75 million). Having talked to many aspiring journalists myself, I know that few would dare to refuse an offer at the Times.

The Times’s success would be welcome were it not at the expense of other news organizations. As the Times continues to report quarterly revenue growth, the rest of the industry flounders. The past two years have reported high-profile lay-offs in both traditional (Gannet) and digital media (Buzzfeed, Mic). The news industry as a whole has no doubt been damaged by the efficiency of digital advertising on social media. But the success of the Times cannot be separated from the decline in the rest of the industry. I’m not saying that the Times is a monopoly; my point is that it is beginning to behave like one. And, because of some unique features of the industry, it is likely to continue on this path.

First, the industry of digital news is not, what Times publisher A.G. Sulzberger called, a “rising-tide-lifts-all-boats” situation. According to the Reuters Institute Digital News Report 2019, “the vast majority [of readers] only have ONE online subscription—suggesting that ‘winner takes all’ dynamics are likely to be important.” People do not usually subscribe to more than one news organization (a phenomenon sometimes called “subscription fatigue”), which means that the Times is succeeding at everyone else’s expense.

Second, the industry of news is not like other industries in that their core assets are human beings as opposed to physical capital like machinery or technology. This means that industry consolidation occurs much more subtly. When companies in other industries want to consolidate, they have to buy their competitors wholesale—since physical assets and technologies are harder to move. In the news industry, the Times can achieve total consolidation without a single corporate acquisition. Since writers with laptops are effectively the key assets of journalism, the Times simply “acquires” the best journalists (i.e. human capital) from other news organizations. Their expanding content mix (fashion, sports, technology etc.) is a sign that the Times has indeed been acquiring the capital of other news organizations without ever having to fall under the scrutiny of antitrust enforcement.

If the Times is implicated in the declining health of smaller news organizations, then it’s not serving the values of democracy as well as it righteously claims. A poverty of local news erodes community bonds and nationalizes politics into the divisive boxing match we see today. Without local news organizations that cater to the issues of smaller communities, all politics become national—we are forced to search for meaning and identity in problems with predefined ideological categories set by national news outlets: abortion, healthcare, gun control, immigration.

A Times monopoly is also anti-democratic because of its excessive control over information. A dominant player in the news industry has too much power over what millions of readers see. Even if loyal readers trust these outlets, there is still something wrong with a public whose news consumption is dependent on the personal decisions of a few journalists. If readers don’t have a viable alternative news source to turn to, these editors have no real accountability. Without any way for readers to impose a cost on media monopolies, readers are vulnerable to the whims of personal judgments within a newsroom.

We might think that the Times can be trusted because of the reputation it’s built as a balanced and objective news outlet. But no news organization is perfect. In his book State of War, Times journalist James Risen recounts a number of stories, including the NSA spying on US citizens, that were delayed or retracted by the Times after discussions with the Bush administration. When the public is dependent on a single news outlet, these faulty decisions become ever more costly to the public. And these decisions are not democratic: No reader had any way of influencing these editorial decisions.

Even if the Times is, in general, highly professional, there are at least two other reasons we should be wary of powerful media. First, self-regulation is always prone to fail. In politics, we expect politicians to act with virtue and integrity but no one is under the illusion that this is enough. By design, periodic elections serve as external checks that keep politicians from abusing their power. Similarly, in our government, the three branches of power are “checked” by each other so we’re not asked to rely on self-regulation. The media is sometimes referred to as the “fourth estate.” But what checks this power if not citizens who can threaten to go to another publication if the outlet abuses its position? The assumption that it is sufficient for big media to regulate itself is anathema to our republican heritage. “If men were angels,” Madison writes in The Federalist Papers, “no government would be necessary.” Allowing a media monopoly to exist is to expect journalists to be angels.

There is also the reality that journalism is not a diverse profession. Many come from white, middle-class, liberal backgrounds and the Times is almost certainly dominated by these groups. This means that even if racial diversity can be achieved through affirmative action, its political diversity will be limited, and will not capture a good part of the political spectrum. When news organizations with narrow political ideologies grow more powerful it creates a media backlash. Different political news sites sprout up that seek to provide a corrective or alternative viewpoint. These sites are created in direct contrast to the media “establishment,” which fosters a news environment where outlets are organized according to oppositional principles. Monopolies in media contribute to polarized environments.

The news industry is no stranger to this “reactive” dynamic. The American media landscape today—where the media is split on ideological lines—is in part a product of the media’s consolidation a few decades earlier. As historian Matthew Pressman writes in On Press: The Liberal Values That Shaped the News, the dominance of news organizations coupled with their liberal bent helped fan a new conservative backlash. “The modern conservative movement has long viewed itself as an insurgent group being victimized by the liberal establishment,” he writes. Conservative media, which in part arose from the frustration with a myopic mainstream, would not be as successful but for the major consolidation of news over the past few decades. Today, the growing success of the Times threatens to repeat this dynamic, bringing with it the risk of exacerbating political tensions.

One of the functions of a strong, independent press is the ability to scrutinize government to protect citizens from abuse. But as media companies grow larger, their power can come to be abused. And, unlike the government which was designed to handle such abuses through checks and balances, we have no way of dealing with media monopolies except placing our blind trust in well-behaved journalists. We should be worried about the Times’s expansion. A monopolistic media ultimately undermines the democracy it purports to defend.

Chang Che is a master’s student in political theory at Oxford. You can read more from him on his website and you can follow him on Twitter @changxche