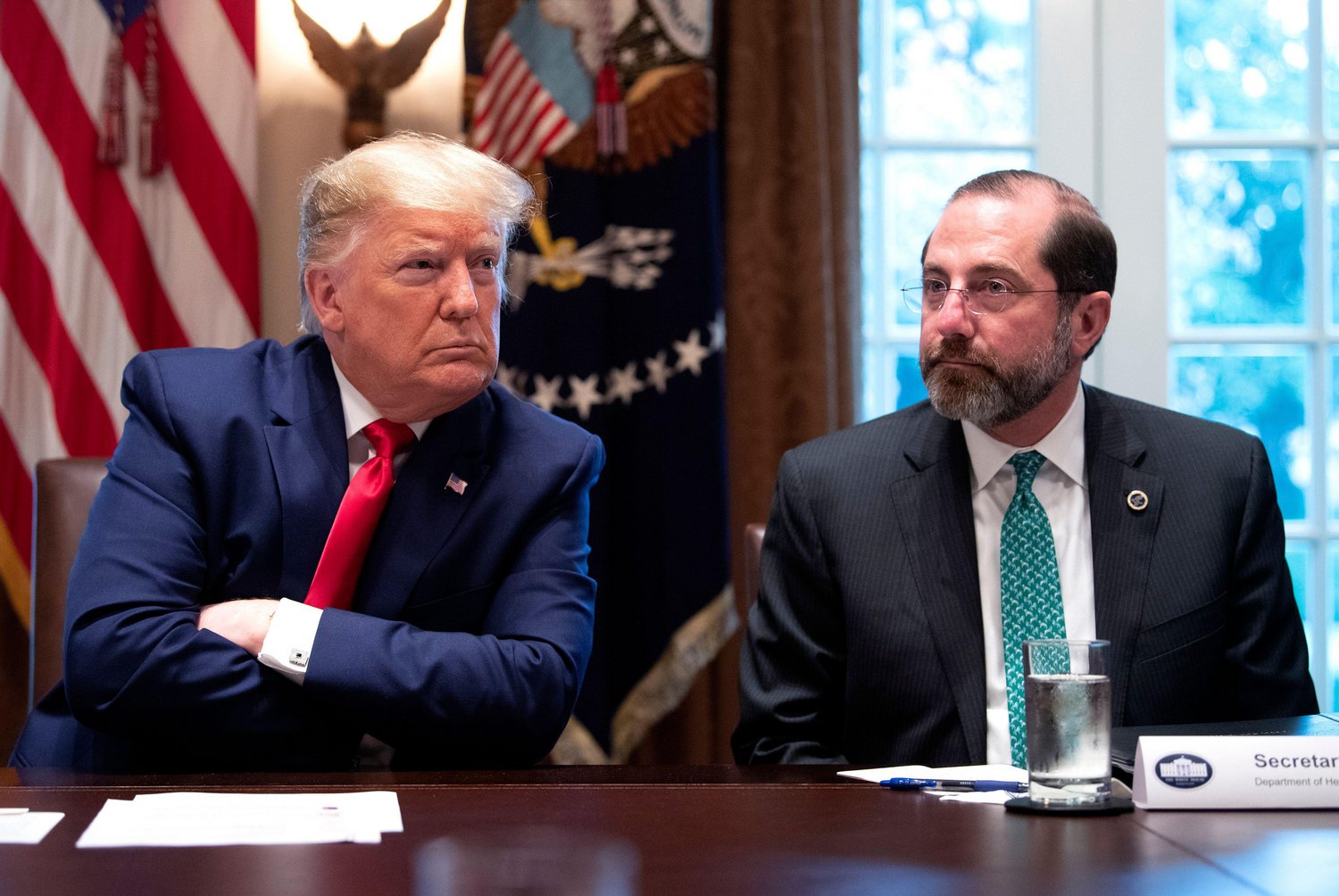 There is another world in which President Trump saw coronavirus sweeping through China and grasped how powerfully and elegantly his claims about the authoritarian and deceptive nature of the Chinese state had been illustrated. The government had reprimanded the doctor who had warned of the virus, and, tragically, the doctor had become its victim. How could anybody doubt him on the Chinese question after its government had displayed such selfish negligence?

Simultaneously, Trump could have realised how much a novel and aggressive virus demonstrated the fact that strong national borders are a necessity. He could have ended travel between China and the US—temporarily, of course—and hurried to quarantine people who had travelled near Wuhan. How could anybody query his stance on national self-interest as migration carried a pandemic round the world?

Seeing that this crisis was about to demonstrate the perils of relying on foreign imports for essential supplies, Trump could have restated the case for economic nationalism. Indeed, he could have demonstrated his commitment to the cause by working to release all the funds required for tests, treatment and containment.

As a noted germaphobe, Trump would have been well-placed to insist, in his humorous but assertive way, that Americans should practice more and better hygiene. Cancelling his rallies would have been a blow, but he could have swung it to his advantage. “You’ve always come out to support me,” he could have said, “And I’m going to support you by saying that you should take a night off. I’ll have plenty of time to meet you later.”

Sure, the Democrats and the media would have attacked him. He would have been lambasted as an opportunist and an authoritarian. But who cares? He would have been right! And as coronavirus would have torn out of China and through Iran and Italy he could have said, with justice, that he was trying to keep Americans safe.

Trump need not have thought coronavirus was a cataclysmic if not apocalyptic angel of death to do this. He need not have shattered the economy. “Seriously, folks, this is not the end of the world, but we have to be smart to get through it, okay?”

Sadly, the Other Trump does not exist. In our timeline, the White House has stubbornly maintained a “business as usual” attitude and the president has repeatedly compared coronavirus to the flu. More people die of the flu, he confidently trumpets, sounding like a pre-ISIS era liberal announcing that more people die in swimming pools than from terrorism and forgetting that the government does not have to spend hundreds of millions of dollars containing the threat of swimming pools. Trump’s rallies—and Trump, let’s not forget, is a president whose average supporter is older than the average American adult—are going ahead. It is difficult to overstate the short-sighted recklessness of this.

To be fair to the president, the downright pathetic institutional response to the virus in the US is by no means all his responsibility. The Centre for Disease Control (CDC) has spectacularly botched what should have been the smooth and swift rollout of testing kits. Americans have been left to plead to be tested, with one mother saying on Twitter:

So to summarize – my 6yo has symptoms consistent with COVID-19 (in children, per the literature) and talking to both the @WADeptHealth & @UWMedicine teledoctor: I should practice social distancing from my 6yo, & she can't be tested for COVID-19 b/c no known contact w/ COVID-19

Also, in the president’s defence, he might be proved correct that the death toll from coronavirus is significantly below 3.4 percent of its carriers. Nations which have had more testing, like South Korea, have had fewer deaths, suggesting that many people have had milder forms of coronavirus but have not been factored in. Nations with better healthcare have also had better results. Just two people have died in Germany, while more than 200 deaths have been announced in Iran. For all the problems with the American healthcare system, no one would claim it is more comparable with the latter than the former.

Again, then, I want to restate that President Trump should not have been expected to announce that the world was ending and that all economic activity should cease. Coronavirus is not the black death, and as irritating as people who solemnly announce that the fear of the virus is more dangerous than the virus has become, it is at least potentially true. While conservatives can make a fetish of “the economy,” it is important to remember that behind the sterile term are people’s businesses, and people’s homes, and people’s hopes and dreams. An awful shock to the economy means an awful shock to American lives. Minimising panic, then, is a worthwhile aim, and not just for the sake of the nation’s blood pressure.

But the tragedy is that the Other Trump could have done this as well! “Folks, there’s no need to be scared. This nation saw off Hitler and the Soviet Union, and we’re going to see this off as well, believe me. We’ve got the smartest people working on it and we’re going to be okay. But China, wow—let me tell you something…”

How has the president misjudged the situation so dramatically? Does he think the media are trying to overshadow what should be a cheerful and optimistic election campaign? In general, despite his gloomy proclamations about his own predicament as a serially slandered and persecuted leader, Trump has tried to present an image of the United States as a nation perpetually improving under his watch. Even in a press conference with CDC officials he wore a hat that read “Keep America Great.” Perhaps he thinks his enemies are trying to rain on his parade.

No doubt, journalists will attack Trump for his reaction—or lack thereof—to the virus and sometimes unfairly. Take Dana Milbank, who clipped a portion of one of Trump’s speeches in which he called the idea that he was responsible for the spread of coronavirus a “hoax” and presented the clip as if he was calling the virus itself a hoax. Thousands of people spread the lie. One can understand the president being aggrieved about this kind of behaviour.

Yet Trump has handed his critics this opportunity on a gold-plated, Trump-branded platter. After all, journalists spent weeks downplaying the problem and wringing their hands over the nebulous threat of “stigma.” (The Other Trump could have made note of this.) Meanwhile, China has been locking down its cities and Israel has been establishing a two-week quarantine for all arrivals. These are not nations, I think that it is fair to say, which are typically characterised by their soft-headedness or failure to rationally pursue their own self-interest. The Italians have closed down their entire country, which may or may not turn out to be a sensible decision but which is inspired by something more than the seasonal flu. For Trump advocates to think this is a manufactured media controversy takes a spectacular unwillingness to look beyond their borders or a terrifyingly monomaniacal view of the world.

Let us consider a presidential response from a peer of Trump’s who might not leap to mind. Paul Kagame of Rwanda is a genuinely authoritarian and anti-democratic leader, with a keen sense of the importance of public image. Like the late Lee Kwan Yew of Singapore, he is also ruthlessly intelligent, and one must respect his swift but calm response to the coronavirus outbreak, which has included sacking ministers who are said to have lied to him about Rwanda’s preparedness, cancelling mass gatherings, installing public sanitation facilities and discouraging Rwanda’s traditionally intimate forms of greeting, such as shaking hands and hugging. Trump can’t even stop himself from shaking people’s hands. Of course, it is far too early to suggest that Rwanda will not have serious problems with the virus, but Kagame has minimised risk without inspiring panic, and Trump could have done the same.

One hopes that the lowest projections for coronavirus victims will be proved correct, or, indeed, be proved to be overestimates. With so much that is unknown about the virus—its different forms, how it spreads and how it might be treated—only time will tell.

Nonetheless, Trump cannot hesitate. Testing must be expanded. Events must be cancelled. People must be given the confidence to seek medical treatment without the fear of financial ruin. Trump showed signs of an improvement on the issue yesterday when he announced that his administration would ask Congress to pass payroll tax relief for workers who are impacted by the disease. This is at least a shuffle in the right direction.

Of course, as I have said, the crisis is not just the president’s responsibility, but even where it is not he must be seen to be encouraging progress and holding authorities to account. None of this means that the country must grind to a halt and the economy must plunge into a bottomless pit. But it does mean that the president must understand that some problems are bigger than his domestic conflicts, and cannot be overwhelmed by personality alone.

Correction: The doctor who warned about the coronavirus was reprimanded not arrested. Apologies for the error.