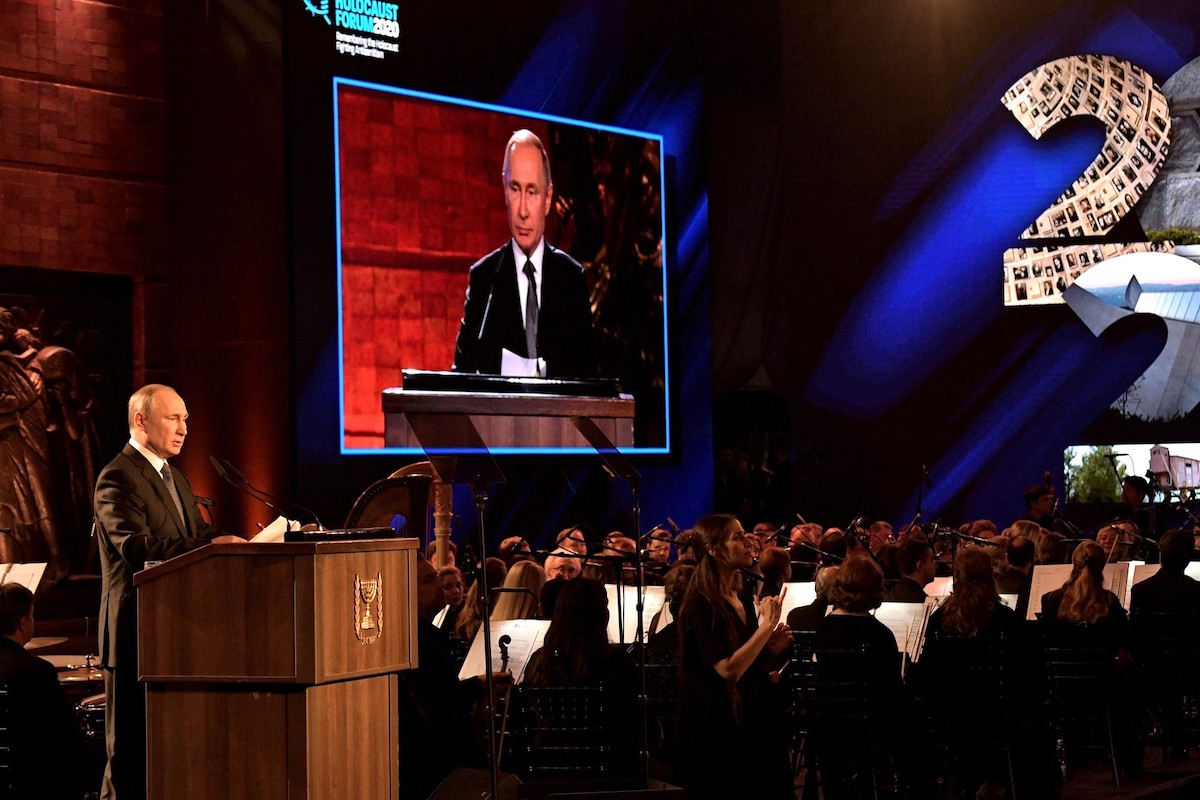 Earlier this month, some 10 days after the World Holocaust Forum held at the Yad Vashem Holocaust memorial museum in Jerusalem to commemorate the 1945 liberation of Auschwitz, the museum issued an unusual apology for a film presentation that contained “inaccuracies” and “created an unbalanced impression”—by, among other things, memory-holing the 1939 division of Poland between Nazi Germany and the Soviet Union and the Soviet occupation of the Baltics in 1940.

The apology letter, signed by Professor Dan Michman of Yad Vashem’s International Institute of Holocaust Research and published in Haaretz, referred to this assault on historical facts as a “regrettable mishap.” But the presentation was actually part of a much bigger problem: the degree to which the forum was turned into a showcase for Russian President Vladimir Putin, his revisionist history, and his friendship with Prime Minister Benjamin Netanyahu.

The January 23rd forum—funded mostly by Russian Jewish billionaire, European Jewish Congress president, and Putin ally Moshe Kantor, and organized in partnership with the Israeli government—more or less channeled the Kremlin propaganda narrative of World War II, in which Soviet Russia was virtually the single-handed victor over the Nazis and rescuer of the Jews. There was no mention of Soviet collusion with Nazi Germany in 1939–1940 under the Molotov-Ribbentrop Pact, or of Soviet war crimes such as the massacre of 22,000 Polish officers and elite professionals—including, by the way, about 900 Jews—at the Katyn Forest.

No one questions the importance of the Soviet Union’s role in the defeat of Nazi Germany after 1941. Soviet troops liberated Auschwitz and were the first witnesses to its horrors. But nor is there any serious dispute about the darker side of the USSR’s role in World War II. In his prime-slot forum speech, Putin not only asserted that it was the “Soviet people” who “liberated Europe from Nazism”; he also attempted to position Russia, in seamless succession to the Soviet Union, as having a special role in Holocaust remembrance. (Along the way, he made the blatantly false claim that about 40 percent of Jews murdered in the Holocaust were Soviet citizens, which quickly drew protests from historians: The actual figure is estimated at 15 to 25 percent.)

What Putin conveniently left out is the Soviet regime’s long record of covering up and minimizing the genocide of Jews in order to keep the focus on Nazi war crimes against the Soviet people—as well as Stalin’s persecution and murder of Jewish anti-Nazi activists in the postwar years. At first, after the German invasion of the Soviet Union in June 1941, the Soviet leadership was anxious to mobilize prominent Jews—particularly cultural and intellectual figures—for propaganda purposes to win foreign support for its war effort and its alliance with Western democracies. In August 1941, two dozen Soviet Jewish writers, journalists, and artists, led by actor and theater director Solomon Mikhoels, issued an appeal to Jewish communities around the world to support the Soviet Union in its fight against Germany. (As the YIVO Encyclopedia of Jews in Eastern Europe notes, “To allow Jews to appeal to their fellow Jews was an extraordinary step for the Kremlin.”) They formed the core of the Jewish Antifascist Committee (JAC), officially created in April 1942. In 1943, Mikhoels and fellow JAC member poet Itzik Feffer went on a seven-month tour of the United States, Mexico, Canada, and England; they met with Jewish leaders as well as renowned public figures such as Albert Einstein, Marc Chagall and Charlie Chaplin, headlined a rally of 50,000 in New York, and raised millions of dollars in aid.

But as the war drew to a close, with Soviet forces victorious and Western alliances secured, the Jewish “antifascists” had outlived their usefulness—and their work to collect evidence of the Nazis’ targeted extermination of Jews was met with barely disguised hostility. The Soviet leadership’s attitude toward this issue can be gleaned from the fact that the Soviet special report on the “monstrous crimes in Oświęcim” (Auschwitz), issued on May 8th, 1945, did not contain a single mention of Jews. It referred to Auschwitz as a “camp for the extermination of captive Soviet people” and described the victims as “citizens of the Soviet Union, Poland, France, Belgium, Holland, Czechoslovakia, Yugoslavia, Hungary, Rumania and other countries.”

When the JAC completed the “Black Book” documenting German atrocities against Jews on Soviet territory, compiled by journalists Ilya Ehrenburg and Vasily Grossman, the volume was reluctantly approved for publication in early 1946 after revisions to ensure that it followed the party line. But before a single copy could be printed, it was banned for “grave political errors,” and the typeset galleys were destroyed. (The book did appear in English in New York the same year; its first Russian-language edition was published in Israel in 1980.) Meanwhile, the Ministry of State Security, or MGB—the KGB’s predecessor—was sending reports to Communist Party leadership accusing JAC of “bourgeois nationalism” and contacts with foreign intelligence.

JAC was disbanded in November 1948; Mikhoels had been murdered by MGB agents several months earlier, his death officially blamed on a hit-and-run accident. There soon followed a massive anti-Semitic campaign against “rootless cosmopolitans.” This coincided with the Soviet leadership’s reversal of its initially friendly stance toward the new state of Israel, a turnabout due to several factors—from Israel’s pro-American position and failure to embrace Soviet-style socialism to suspicions of disloyalty among Soviet Jews, particularly after tens of thousands turned out to see Israeli envoy Golda Meir on her visit to Moscow’s Choral Synagogue. (Meir’s request to Stalin to permit Jewish emigration to Israel added more fuel to the fire: no one could seek to exit the workers’ paradise.)

In the general persecution of Jews, former members and staffers of the JAC were especially hard hit: over a hundred were arrested, and more than a dozen, including Feffer, were executed in 1952. Prominent Jewish doctors were accused of deliberately murdering patients; even the Jewish wife of Politburo member Vyacheslav Molotov, Polina Zhemchuzhina, was arrested as a “Zionist agent.” There were rumors of a planned mass deportation of Soviet Jews to the “Jewish Autonomous Republic” in Siberia (ostensibly to save them from the wrath of the people).

Stalin’s death in March 1953 brought a halt to the Soviet war on Jews, but Soviet virtual silence about the Holocaust continued. There was no commemoration, for example, of the massacre at Babi Yar, the site near Kyiv where some 33,000 Jews were slaughtered in two days in September 1941 (an event mentioned in Putin’s speech). In 1961, Yevgeny Yevtushenko briefly broke this silence with his poem “Babi Yar,” published in the weekly Literary Gazette; it explicitly identified the victims as Jews and described the murders as part of the long history of anti-Semitic violence. In response, the poet was viciously trashed in the Soviet press for fomenting ethnic division, and the editor who had accepted and printed the poem was fired “for insufficient vigilance.” At a meeting with writers and artists, then-Soviet leader Nikita Khrushchev himself assailed the author for his ideological lapse. While Yevtushenko eventually found his way back into the regime’s good graces, “Babi Yar” was not included in any of the Soviet-era editions of his poetry except for one three-volume collection. (Incidentally, the poem’s opening line—“No monument stands over Babi Yar”—remained true until the fall of the Soviet Union. The first memorials on the site were built in an independent Ukraine.)

All that history was missing from Putin’s speech. So was the well-known role of Soviet propaganda in fomenting anti-Jewish vitriol—under the guise of “anti-Zionism”—from the late-1960s to the mid-1980s. Putin did, however, find the time to take swipes at ex-Soviet republics that currently refuse to march to Russia’s orders—Ukraine, Lithuania, Latvia—by pointedly noting their populations’ complicity in the Nazi slaughter of Jews. (Nazi collaboration in Russia and in mostly Russia-friendly Belarus got a pass.) He may have also subtly taunted Poland by referencing the Nazi massacre at the Belarusian village of Khatyn—a name almost identical to Katyn. Many historians believe the Soviets deliberately amplified the Khatyn tragedy in the late-1960s because of the name similarity, in the hope that the confusion would distract from the matter of Katyn.

For Putin, such distortions and lies are business as usual. But abetting them was a shameful moment for the Israeli government—especially since, as Times of Israel editor David Horovitz noted, the Kremlin strongman was clearly “the dominant presence” at the January 23 event. Before the start of the forum, Putin was greeted on the tarmac at Ben Gurion Airport by Israeli Foreign Minister Israel Katz, who offered his personal thanks for the Soviet Army’s liberation of Auschwitz. He was the star speaker at the inauguration of a memorial to victims of the German siege of Leningrad, with Israeli President Reuven Rivlin and Prime Minister Netanyahu at his side. Then, arriving slightly late at the forum itself, he was introduced and escorted to his seat by Rivlin. He got, as Russian Jewish commentator Ilya Milshtein wrote on the independent Russian website Grani.ru, “a Tsar’s welcome.”

The indecency of this spectacle was compounded by the fact that Putin was allowed to posture as the savior of Kremlin hostage Naama Issachar, whom he pardoned after his trip. (The 26-year-old Israeli, arrested during a brief layover at a Moscow airport over a few grams of marijuana in her checked luggage to which she did not even have access on Russian soil, had received a draconian seven-year sentence; her release apparently involved Israeli concessions in a dispute over a valuable religious site, the Alexander Courtyard in Jerusalem.) Writing about Putin’s moment as “the Tsar-liberator of the Jewish people” in a blogpost widely reprinted in the Russian-language Israeli press, Ukrainian Jewish journalist Vitaly Portnikov called it “an abomination.” Strong language, perhaps. But the fact that Putin’s self-congratulatory spin was allowed to color an event commemorating the dead of the Holocaust deserves no less.

Netanyahu has long courted anti-liberal leaders, from Putin to Hungary’s Viktor Orban to Brazil’s Jair Bolsonaro, who are willing to support Israel in the face of growing antagonism from liberal democracies. One may sympathize with this quest, at least if one believes—as I do—that the current efforts to isolate Israel are unjust and rife with double standards. But the scandal at the World Holocaust Forum is a reminder that fraternizing with authoritarians has its price.