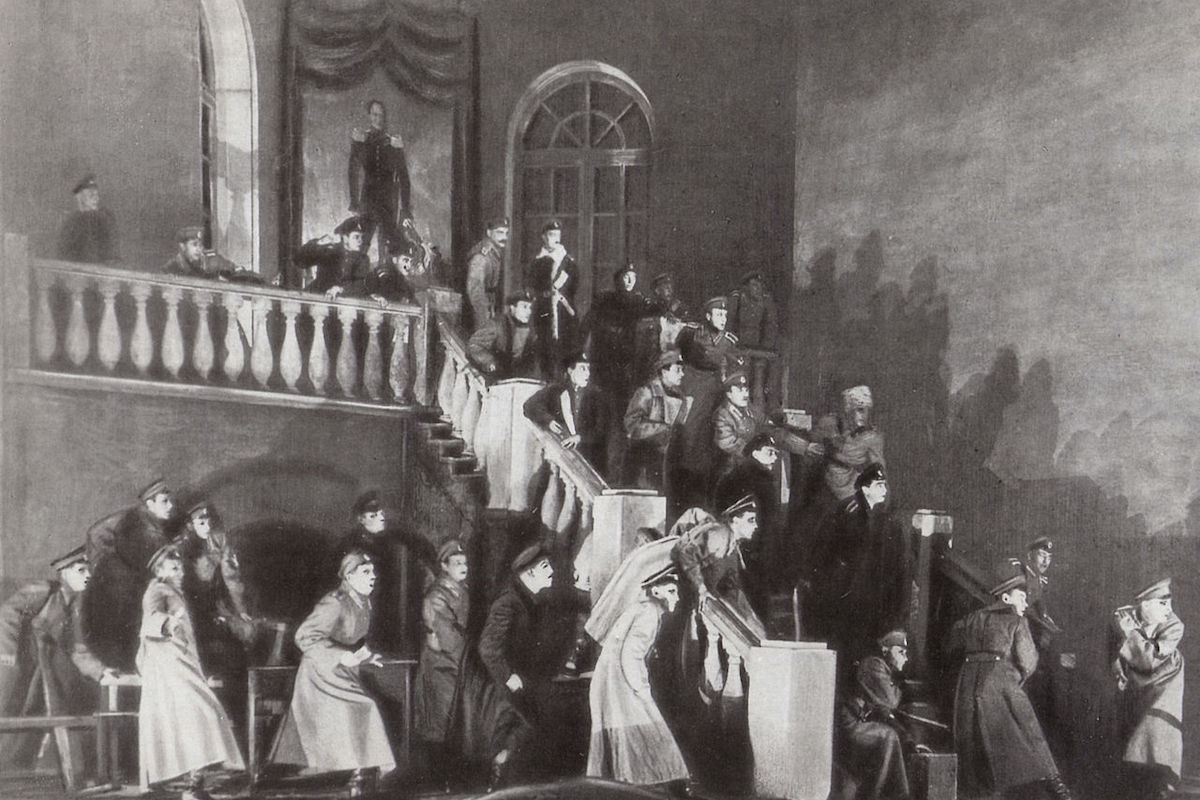 It was a difficult time with a difficult actor. I was directing one of my own plays, and the lead actor wasn’t acting. Yet I knew he was more than capable of executing the part.

Finally, I confronted him. “Why aren’t you giving anything in the scene?” I asked. The actor was exasperated: “You know, when you gave me this play to read, I was hoping for once I wouldn’t have to play a screwed-up character. Why are all the characters you write so screwed up?”

That was the last time I hired him.

What kind of play do you want me to write? Drama emerges from conflict. And I honestly have no idea why any actor would want to appear in a serious play featuring protagonists who are not, in some way, “screwed up.” I mean, aren’t we all just a little bit screwed up? And isn’t that what we need to see on the stage: reflections of our deeply conflicted, neurotic selves?

What I didn’t know was that this actor was ahead of his time. Nowadays, young actors are talking more and more about the “trauma” associated with their profession. In a widely circulated article titled Out of Character: How Acting Puts a Mental Strain on Performers, Leith Taylor noted that even as of 2017, “theatre productions are more frequently using the services of psychologists—particularly if the subject matter is dark or difficult and likely to trigger psychological or emotional reactions in the actors” due to the “deep emotions they are often required to access and express when playing a role and the strong identification they can form with their characters.” The article concluded with the expressed hope that “artists will hopefully suffer a little less for their art in order to provide audiences with their best work.”

The most recent edition of a newsletter published by the Canadian Actors’ Equity Association, the union representing workers who deliver live performances, warns that “sometimes, playing characters in various states of trauma can be overwhelming, affecting the performer’s own mental well-being.” The author reports that “directors are struggling with the responsibility of emotional labour that is being placed on their shoulders,” and approvingly describes enlightened directors who “started each rehearsal with yoga” or otherwise proved responsive to actors’ anxieties.

It’s absolutely true that, as the article notes, many actors lead “precarious” professional lives—“the rejection, the uncertainty, the financial hardships, the travel that takes you away from family and loved ones.” And the author is correct to counsel that directors exhibit sensitivity toward performers who are struggling with work-life balance. But I raise an eyebrow at the suggestion that it’s their identification with the parts they play that pushes them over the edge: “There is a long held belief that great art is born of great pain and that only by delving deep into despair can an artist reach the height of their craft…there is a danger in accessing those areas of emotional and psychological tenderness.”

Konstantin Stanislavski comes to mind. From the 1930s onward, the legendary Russian theater director’s “Method of Physical Action” became influential, eventually leading to the widespread adoption of the so-called “method acting” approach in the West. Performers such as Marilyn Monroe and James Dean underwent intensive psychoanalysis while training at The Actors Studio in New York City, a process aimed at spurring the same kind of deep psychic exploration that seems to so worry some actors today.

But it’s important to note that Stanislavski didn’t focus on psychoanalysis per se, instead he emphasized a psycho-physical approach that encouraged actors to explore their character’ motivations through improvisation, movement and dialogue. It was the American iterations that took his insights into the more formal realm of psychotherapy and even psychiatry.

Some acting teachers now are taking Stanislavsky to the extreme, suggesting that there is no such thing as creating a fictional character: “Someone says character is the external life of the person onstage, the way that that person moves or stands or holds a handkerchief, or their mannerisms,” wrote David Mamet in his 1997 book True and False: Heresy and Common Sense for the Actor. “But that person onstage is you. It is not a construct you are free to amend or mold. It’s you. It is your character which you take onstage.”

Actors’ own emotional lives are now being emphasized at the expense of the characters they’re hired to play. In his 2015 book, Theatre of the Unimpressed: In Search of Vital Drama, Canadian playwright and director Jordan Tannahill argued that the best theatre often features actors who are not playing a role strictly speaking, but rather addressing the audience directly through theatrical sub-genres that emphasize confession and audience immersion. Tannahill approvingly quoted Toronto theatre artist Jacob Zimmer, who “describes the precise moment he falls out of love with a play: ‘House to half. Stage to half. House out. Stage out. Shuffle shuffle shuffle. Lights up. I’m done! I’m done entirely!’” The ambition, Tannahill wrote, is to reject “the parochial tradition of slowly dimming the house lights and stage lights to suggest that a play is starting, while the actors sneak onstage in the darkness.”

This is the culmination of what I regard as a wrong turn on the path to theatrical realism. Yes, Stanislavski searched for truth in his performances. But he did not preside over the sort of “reality theatre” that featured men and women simply exhibiting the tics and confessions they’d brought with them into their dressing rooms. Stanislavski’s theories served a Russian theatre dominated by Chekhov, whose plays were very much fictional works in which actors played characters, not themselves.

One problem with actors who purport to be playing themselves on the stage is that they are still engaged in an act of lying. They are not actually at home having a chat with intimate friends (and they might even be lying to them, too!), or confessing their feelings to a spouse or therapist. They are on stage, in a theatre (or ersatz theatre, in the case of certain immersive works), doing a job, for which they are (hopefully) paid. What they are doing is fake, and will always be fake. And if they truly do find the business of acting to represent a painful intrusion upon their own soul, it might be because they misunderstand the difference between presenting “a lie that makes us realize the truth,” as Pablo Piccasso put it, and reality itself.

I am only occasionally an actor, and have taught acting infrequently. One reason I avoid the field is that I’ve grown suspicious of the quasi-masturbatory, psychoanalytic bent of modern training programs. I don’t know if I fully agree with Noel Coward’s minimalist 1950s-era advice to actors, which I will paraphrase as “Speak loudly and clearly, and don’t bump into the furniture.” But I certainly am partial to Simon Callow (b. 1949), who confessed in his 1984 autobiography Being An Actor that he was attracted to the theatre not because it was a place to engage in self-discovery or self-exhibition, but because it was a place to hide. (Not quite incidentally, Callow used the occasion of the book’s publication to come out publicly as gay—at the age of 35.)

Art can help us explore ideas and understand reality. But it should not be confused with reality itself. We must not expect it to aspire to morality in the way that people aspire to be moral, or even to present an optimistic or even a “healthy” viewpoint. Art is an anti-reality spun for the audience, tempting them to embrace a temporary, mysterious hypnotizing sense of pain and delight.

Once you blur the line between art and reality, you inevitably come to insist that, for both audiences and artists themselves, a play be ethical, moral, redemptive, ideologically compliant and that it contribute to how you feel when you either act in it or watch it. Given the prevailing trends in the theater industry, it should come as no surprise that the aforementioned Canadian Actors’ Equity Association newsletter article informs us that “in the post #MeToo era, with trigger warnings and intimacy coaches becoming part of the standard vernacular, a growing awareness of performers’ needs for their own mental well-being is taking hold…Younger actors, in particular are putting the onus on directors to help them deal with difficult reactions to the material in a way that wasn’t common even a few short years ago.”

Actors must be treated with respect by their directors. But good theater always has been dangerous, in the sense that it awakens the mind to dangerous ideas and emotions.

Was it always thus? No one knows the exact nature of actor-audience interaction in ancient Greece. But research suggests that Greek tragedy—which originated in primal “goat songs” (religious elegies that accompanied animal sacrifice)—could send audiences into a mystic frenzy, accompanied by music, dance, masks and choral incantation. Aristotle spoke of “catharsis,” which signals purgation. The audience would watch, weep and be afraid, draining their sense of pity and fear—the opposite of trigger warnings and moral preaching.

Plato mistrusted the artist’s gift for deception, and sought to ban art that didn’t serve the state. He hated the sophists, including Gorgias, who championed rhetoric over reason. Writer Christopher Lyle Johnstone informs us that Gorgias defined poetry as “capable of producing in hearers the divinest works….they can stop fear, banish grief, create joy, nurture pity, induce longing, cause suffering, bring pleasure…Speech is magic.” Gorgias proposed, paradoxically, that although all art is deception, it is the wise man who lets himself be deceived. Like Shakespeare, he was an aesthete who trusted the authority of artistic deception. And I defy you to find a Shakespeare play with a clear “moral.”

But times have changed. Following Plato’s conservative example, arts councils now increasingly “judge applicants according to relevance not excellence,” as one writer put it. And a prominent grant recipient recently declared that “art for art’s sake should be thrown into Lake Ontario.” As seen through this lens, the apparent “immorality” (or amorality)  of Shakespeare, Greek tragedy and the rest of the traditional canon becomes clear. The characters in most of these old plays are indeed very “screwed up.” And these days, actors performing in them in the old-fashioned way—whereby the curtain is pulled to reveal people portraying an array of damaged fictional human beings—are not urged to use psychoanalysis in the service of illusion, but instead to seek therapeutic help to protect them from the toxic characters with whom they mistakenly confuse themselves.

Every generation of director and actor collectively imagines itself as being on the cutting edge of art. But by blurring the line between art and reality, some performers now are turning the craft of acting into the servant of therapy. No longer can we trust art to “stop fear, banish grief, create joy, nurture pity, induce longing, cause suffering, bring pleasure.” In seeking “safer spaces” for actors, we’re creating a hostile environment for art.

Sky Gilbert is a Canadian writer, actor, professor and drag performer. He teaches creative writing and theatre studies at the University of Guelph. His new book Shakespeare: Beyond Science: When Poetry Was the World, will be published in the fall of 2020 by Guernica.

Featured image: Scene from a 1926 Moscow Art Theatre production of Mikhail Bulgakov’s The Days of the Turbins, directed by Konstantin Stanislavski.