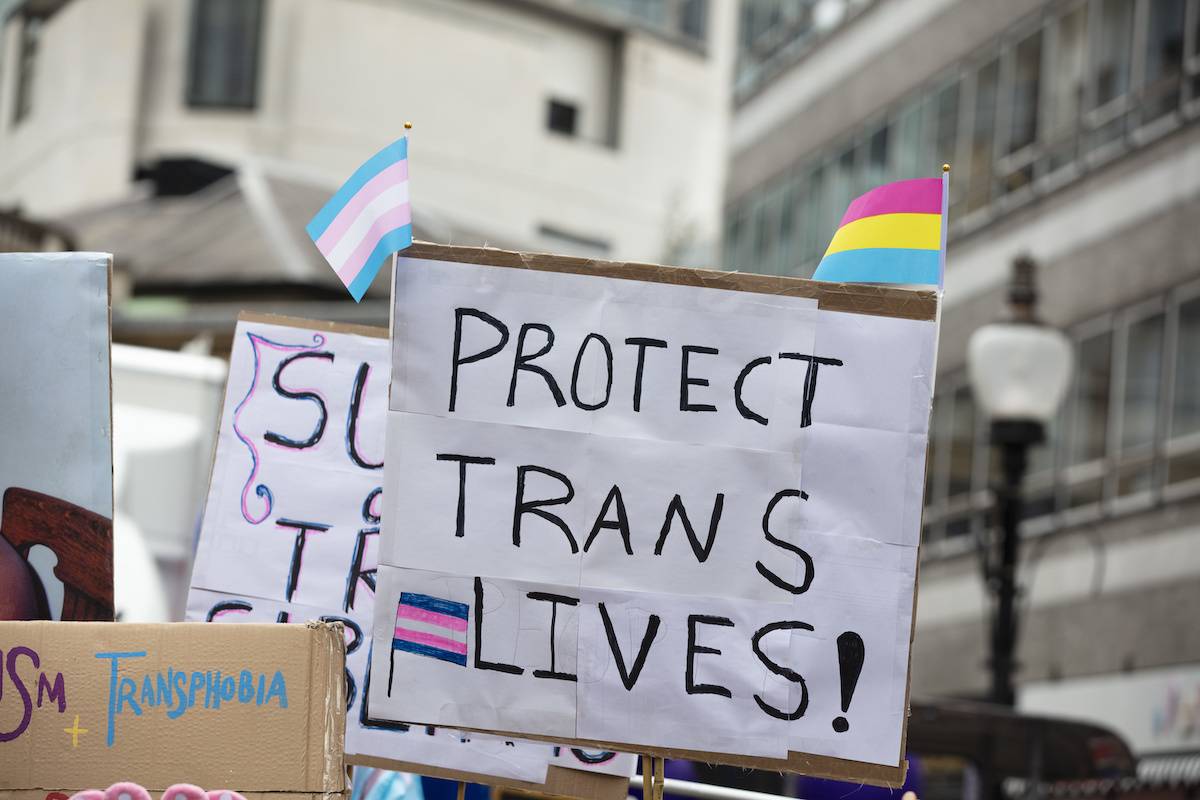 The claim that there’s an “epidemic” of fatal anti-transgender violence in the United States has been made widely in recent years. A Google search for the phrase “epidemic of anti-trans violence” turns up pieces from the New York Times, NBC National News, ABC National News, and the Human Rights Campaign, a leading LGBT lobby group—among 2,500,000 other results. The HRC’s primary on-point article was headlined ‘A National Epidemic: Fatal Anti-Transgender Violence,’ while the Times led with ‘Eighteen Transgender Killings This Year Raise Fears of an Epidemic.’ Transgender Day of Remembrance has been celebrated since the late 1990s to honor those “members of the transgender community whose lives were lost in acts of anti-transgender violence,” and the American Medical Association has stated on record that fatal attacks on transgender people—particularly minority trans women—constitute a large part of an “epidemic of violence” against the trans community.

However, there is remarkably little evidence that transgender Americans are killed at an unusually high rate. According to an exhaustive database kept by the HRC, there were 29 recorded murders of trans individuals in the most violent recent year on record (2017), a fraction of the 17,294 murders committed that year. In fact, the transgender murder rate is far lower than the murder rates for African Americans, poor Americans of all races, and “men” in general. Further, most murders of trans persons are same-race domestic or personal disputes, not hate crimes.

In the Times article, authors Rick Rojas and Vanessa Swales open their piece by noting that in 2019 “at least 18 trans persons” have been murdered “in a wave of violence that the American Medical Association has declared an epidemic.” According to the article, trans people—in particular trans women—have been shot, beaten, found dead in lakes, and even “burned beyond recognition.” Further, the situation seems to be getting worse: the Times journalists note that “many” say hostility toward trans people has intensified “as a rise in visibility has stirred animosity, and motivated people to attack.” Transgender Memphis woman Kayla Gore is quoted saying that the apparent rise in anti-transgender crime has pushed her and others toward increased personal vigilance: “[An attack] is always at the forefront of our minds, when we’re leaving work, going to work, going to school.” ABC News’s account contains similar language, with the authors stating: “For transgender women of color, every day is a fight for survival.”

But is this an accurate summary of the dangers transgender people face? The Human Rights Campaign maintains a year-by-year database containing every known case of a transgender individual being killed by violent means, and gives this number as 29 in 2017, 26 in 2018, and 22 in 2019. Not only do these figures not reflect a year-by-year increase in attacks on trans persons—they are remarkably consistent, and may be trending slightly downwards—they also indicate that the trans murder rate is significantly lower than the murder rate for Americans overall.

Let’s crunch the numbers. Taking the HRC’s highest recent estimate of trans fatalities (29) as representative, and assuming the transgender population to be 0.6 per cent of the U.S. population—although some trans activists argue the true figure is as high as 3 per cent, which would make the murder rate even lower—the total number of murders in a hypothetical all-trans USA would be roughly 4,800 per year (4,833). In other words, if you multiply the population of the US (327,167,434) by 0.6 per cent you get a current transgender population estimate of 1,963,004.6, and if you divide that figure by 29 (the number of murders) you get 67,690—one murder per 67,690 trans citizens. That works out as a projected annual total of 4,833 murders (327,167,434/67,690) in an all-trans America, with an annual murder rate of 1.48 per 100,000 Americans. That’s about one-fourth of the actual current murder rate: there were 16,214 recorded homicides in the United States in 2018 (five per 100,000) and 17,294 in 2017. While LGBT advocates may be correct that there is some under-reporting of the transgender murder rate because not all trans individuals are “out,” the fact is that the murder rate for trans people would have to increase by 300-400 per cent to match the murder rate for the general population.

The absence of a homicide “epidemic” for transgender people becomes even more apparent when we compare trans murder totals not merely to the population overall, but to specific high-mortality groups within it. The most vulnerable of these is my own group, African Americans. According to the FBI, of the 14,123 murders in 2018 in which the original police agency to investigate provided demographic information about the victim, 6,088 involved a white victim and 7,407 involved a black victim. Given that blacks make up only 12-13 per cent of the American population, we can see that the black murder rate—which I calculate at one murder per 5,298 persons, or 18.88 per 100,000—is roughly six times the Caucasian rate and almost 13 times the allegedly “epidemic” transgender murder rate.

African Americans are hardly alone among Americans in being disproportionately likely to be murdered. Looking at the “middle tables” of the FBI’s 2018 Crime in the United States report—such as Table Six, which breaks serious crime down by region and metropolitan statistical area (MSA) within states—it seems virtually certain that murder rates for young Latino or “poor white” men, among other population groups, are an order of magnitude higher than the rate for trans persons. While that’s an estimate, it is a matter of record that the murder rate for all males—one per 14,981 citizens, or 6.68 per 100,000—was 454 per cent higher than the transgender murder rate in 2018. In fact, the murder rate for trans women (and trans men) appears to be on par with the murder rate for women overall.

Not only is there no “epidemic” of murders of transgender individuals, it’s also not true that most trans murders are motivated by “hate.” The first case I reviewed while researching this article, that of Claire Legato, involved a trans woman killed while attempting to break up a physical dispute over a financial debt between her own mother and a close family friend. This was not atypical. The conservative writer Chad Greene, himself a member of the LGBT community, recently reviewed a sample of 118 of the cases of anti-trans homicide compiled by the Human Rights Campaign. His conclusion: exactly four of the perpetrators were clearly motivated by “anti-trans bias,” animus, or hatred. In contrast, 37 of the murders were due to domestic violence, and 24 involved sex workers and were largely the result of the dangerous working conditions associated with illegal sex work. More than a few others were essentially random acts of violence: one of the victims in Greene’s data set was Jordan Cofer, the transgender man murdered by the Dayton Shooter. (Greene’s work can be found here.)

In addition to not being hate crimes, the majority of transgender murders are intra-racial. According to Greene, whose conclusions align with my own analysis, 34 of the 37 identified murderers of black trans persons killed between 2015 and 2019 (89.5 per cent) are themselves black. The same holds true for the killers of white trans individuals: in seven of nine such murders during the period under review, the perpetrator was Caucasian. Even among Hispanics, who can be of any race and can identify as members of more than one ethnic group, at least four of the eight individuals responsible for recent fatal attacks on Hispanic trans persons were themselves explicitly identified as Hispanic or Latino.

There is no reason any of this should be surprising. It is widely known among criminologists and political scientists that, for all the media furor about inter-racial crimes, the significant majority of serious crime is intra-racial. Inner-city shooters and tough “rednecks” almost never travel to attack one another. From 1980 through to the modern era, according to PolitiFact, 85 per cent of white murder victims have been killed by other whites, and 93 per cent of black murder victims have been killed by other blacks. What is true for all Americans appears to also be true of trans people.

The truth is there is no epidemic of transgender murders. The recorded transgender murder rate is 1/3 or less of the overall murder rate for all American citizens and legal residents. Further, when such murders do occur, few are motivated by hatred and roughly 80 per cent are same-race killings. These statements are not “arguments” or “allegations” but simply declarations of factual truth. And in an environment where journalists such as Andy Ngo risk being banished from social media for simply stating these facts, it is important to reiterate a statement of principle that has been a cornerstone of science since Galileo: no one should be punished for telling the truth.

Wilfred Reilly is an Associate Professor of Political Science at Kentucky State University. He is the author of Hate Crime Hoax and the upcoming Taboo: Ten Facts You Can’t Talk About.