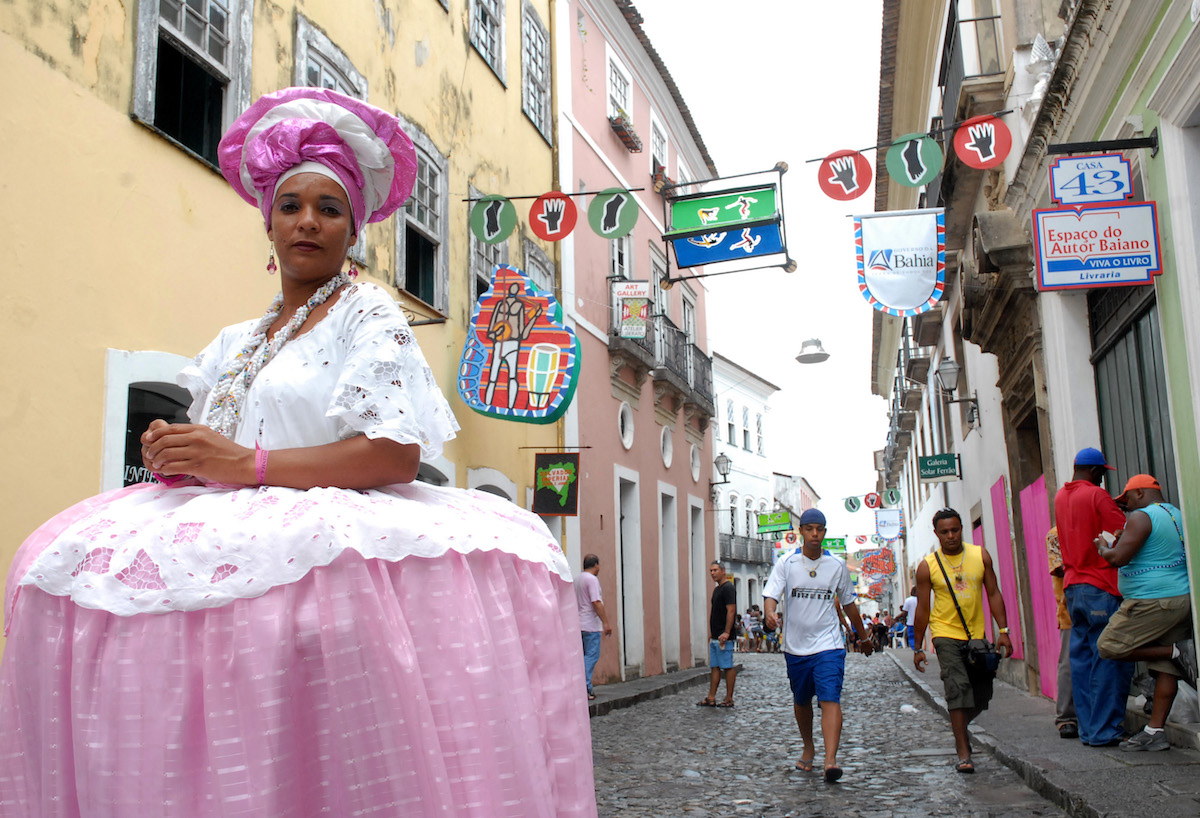 If you’re looking for evidence of racial inequality in Brazil, it isn’t hard to find. Racism is a serious problem in my country, as indicated by statistics showing that Black Brazilians are disproportionately likely to be poor, die young, and suffer from criminal violence. But rather than focusing on such real problems, many Brazilian elites now take their cue from the current Western obsession with aesthetic representation, and instead focus their attention on fake racism scandals that play out on social media.

The latest example played out in February, at the 50th birthday party of Donata Meirelles, the (now former) editor of the Brazilian edition of Vogue. The party was held in Salvador, the capital of Bahia state, and a city renowned as a centre of Brazilian black culture, being 28% black in a country where blacks (sometimes known as Afro-Brazilians) make up only about 8% of the total population. Candomblé, an Afro-Brazilian religion, is stronger and more visible in Salvador than in the rest of the country, having been melded into the local Catholic religious tradition. (Race relations in Brazil are complicated by the fact that a separate, much larger group classified as “browns” or “mixed race” make up 47% of the population, and often are victims of the same prejudice as is directed at blacks.)

One of the most visible symbols of Candomblé culture is the presence of Baianas—black women who sell acarajé and other delicacies in the streets. Often, they are mothers or daughters of the saints (Mães e filhas de santo)—religious initiates whose status is recognised by the state. With their elaborate and flamboyant dress and dances (a mainstay at Carnival celebrations), Baianas often appear in restaurants and at parties. Unfortunately, that livelihood may now be in peril thanks to the uproar surrounding Ms. Meirelles’ party and her subsequent resignation from Vogue.

Images from the party showed Donata Meirelles, who is white, sitting on a throne-like seat flanked by four black women dressed in white. New York-based fashionista Shelby Ivey Christie Tweeted some of the photos, along with the comment: “Vogue Brazil’s Style Director Donata Meirelles had a very disgusting 50th birthday party theme last night. There appears to be a Brazilian slave + master theme. Mucamas (house slaves), who were very clearly darker complexioned, were posed as props alongside guests.”

There appears to be a Brazilian slave + master theme. Mucamas (house slaves), who were very clearly darker complexioned, were posed as props alongside guests #DoShow50 pic.twitter.com/NrEY4nJuF8

But the selection of photos used to indict Ms. Meirelles was deceptive. Other pictures from the evening showed the Baianas sitting in the same chairs, which had been set out at the event for the Baianas’ own use, and had become a prop for the pictures merely on a spontaneous basis. Baianas often appear at official events held by the local mayor and governor, and photos of this type are common at such gatherings, typically in a context of intercultural respect and admiration.

Critics compared the women’s clothes to the white uniforms worn by old house slaves, a claim that disrespectfully distorts the modern cultural role of the Baianas. Indeed, nothing about Ms. Meirelles’ party seems to have been racist—which explains why the Baianas themselves weren’t the ones to have complained about it. In fact, these so-called racism victims apparently weren’t consulted by those who claimed to be outraged on their behalf. Some of the Baianas even asked authorities to investigate those who denounced their role at the party, being understandably fearful that the controversy might cause them to lose jobs as hostesses at future events. In a recent joint statement signed by representatives of various institutions linked to the fight against racism, the Ministry of Public Labour Prosecution declared that “it is not possible…to interpret the hiring of the Baianas…as an act of subalternization of the black woman.”

Not surprisingly, the angriest denunciations originated with activists from outside Bahia, such as the aforementioned Shelby Ivey Christie, who don’t appear to understand the local culture. “The black women were used as objects to create an exotic scene,” said Stephanie Ribeiro, a columnist for the Brazilian edition of Marie Claire, adding that “it’s reminiscent of colonialism and romanticizes those times. She was recreating the image where whites are superior and blacks are dehumanized.” It’s notable that Ribeiro is from São Paulo, near Brazil’s southern tip, which lies 2,000 km away from the northeastern city of Salvador. (Brazil is an enormous country, and different regions have their own cultural practices, whose nature can be easily misinterpreted by outsiders.)

This fake scandal is reminiscent of a similar controversy in Fortaleza, capital of the state of Ceará, also in northeastern Brazil. During a folk presentation at a National Student Union event in 2017, a group of black activists rebelled at what they considered “blackface” exhibited by artists performing a Maracatu—an ancient, religiously rooted carnival tradition that combines music, dance and faith rituals. (The art form dates to 19th-century black brotherhoods that were created by enslaved blacks seeking to preserve their culture.) Researchers have conflicting views on the reason why some Maracatu participants paint their faces black—an act known as negrume—with some suggesting it may have been a strategy to hide the identity of participants. But whatever the explanation, the practice has no connection to the American blackface tradition, by which white actors ridiculed blacks in minstrel shows and similarly racist forms of entertainment. Nevertheless, activists used violence to stop the 2017 event.

“Before militant activism was colonised by the American black movement…the Baianas proudly displayed their clothes in public spaces,” wrote political commentator Lucas Baqueiro (a Salvador native) of the recent controversy over Donata Meirelles. Even when seen through a historical lens, he argued, the Baianas “would not even fit into any celebration of colonial slavery. To [suggest otherwise] is to show ignorance of history and anthropology. The [Baianas] profession, existing and recognized since the 18th century in the city of Salvador, was always exercised by people born free or liberated…The richly adorned and differentiated clothing, with heavy jewellery of Creole style [actually was intended] to differentiate them [from slaves].” (Almost 200 years ago, Maria Graham, an early Brazilian anthropologist, noted in Diário de uma viagem ao Brasil—“Diary of a Travel to Brazil”—that the Baianas often were owners of slaves, sometimes sharing profit with them, and exercised one of the most prominent positions then allowed to black women.)

Letícia Bahia, co-founder of the feminist site AzMina and a consultant for the United Nations Foundation, has criticized Revista Fórum, the leftist site that originally promoted the mobbing of Donata Meirelles. “It was up to the journalist…to go after these women and ask what they were wearing, how they ended up at the party—in short, to find out [what was going on],” she wrote on Facebook. “But no: Fórum simply decrees that women are dressed as slaves, without giving these women a voice. Oops, but [isn’t] not giving a voice to black people [itself an act of] racism?”

A few days later, the Baianas expressed themselves: “We are women, Baianas de Acarajés, hostess, that’s our job, hosting in hotels, in events, in several places, we are being called mucamas, slaves. We are not slaves, we are workers, this [racism case] never existed, we were hired to work in the reception, no one imposed any clothes for us to wear, no one said that we would have to stand one on one side, another on the other [of the chair], for someone to sit and take a picture, [but there were] such situations, but that was not what was arranged, [it just] happened, and people use mischief, perversity to denigrate the image of others. We are very sad about this because this is not what happened. We would never submit to such a role.”

But their opinions don’t seem to matter to those purporting to speak on the Baianas’ behalf. Stephanie Ribeiro no doubt is quite interested in being part of the “activist forum” that Vogue now has announced in the aftermath of the controversy. New full-time jobs may even be in store for these fashionable elites. As Ribeiro told the Guardian, “they should just hire black people to work at Vogue Brasil, not create a forum for black activists to act like babysitters telling them whether something is racist or not.”

A couple of days before that fateful birthday party in Salvador, 13 young, mostly black men were killed by the police in a Rio de Janeiro slum. It was a massive toll, even by the standards of this crime-ridden part of the country. Yet according to data compiled by Pablo Ortellado, a professor at the University of São Paulo and reported by Folha de São Paulo’s columnist Joel Pinheiro da Fonseca, the buzz online generated by this tragedy was much smaller than that surrounding Donata Meirelles’ festivities. Dealing with issues as complicated as structural racism, drug trafficking, and police violence in slums apparently doesn’t generate nearly as many clicks on social media as torqued complaints about a fancy party.

Addressing Brazil’s legacy of racism is surely one of my country’s most urgent moral priorities. But as this episode shows, the importation of Western-style outrage culture will do little to help the campaign for social justice. Indeed, by distracting activists and journalists with fake scandals, it may have precisely the opposite effect.

Raphael Tsavkko Garcia is a Brazilian journalist, and a PhD candidate in Human Rights at the University of Deusto. Follow him on Twitter at @Tsavkko.

Featured image: A Baiana photographed on a Salvador street in 2008.