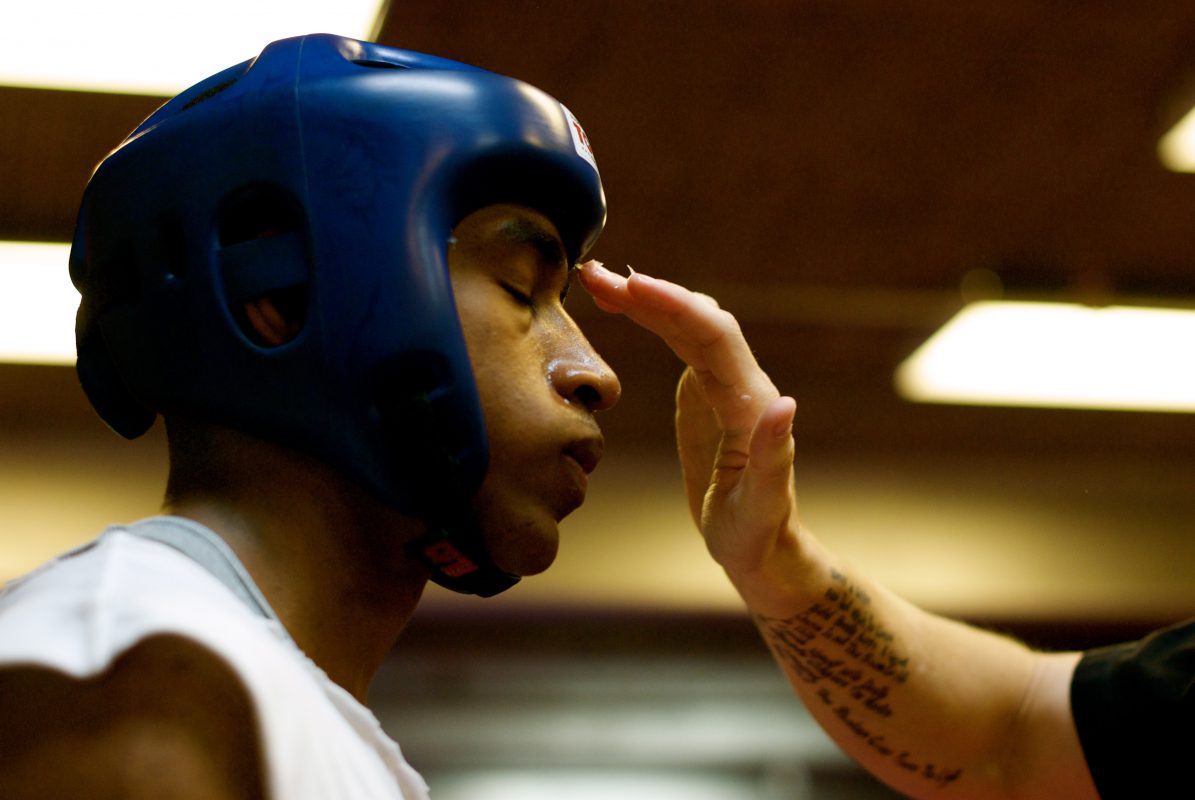 In the middle of a dry, dusty desert in Nevada, I rode my bicycle down a street that wasn’t there a few weeks ago, and would be gone again in just a few days. C is a main street in Black Rock City, the Burning Man gathering that springs up in the alkali playa a few hours from Reno. At “Camp Settle This Like Men,” I parked my bike, donned a thick, stiff kimono and pants, and stepped onto the mats. I’d not brought my belt from home, so strapped on a loaner white belt, and invited a burly, bearded man with a huge smile and a brown belt to roll.

A few minutes later, we stopped for breath. “You’re a black belt aren’t you?” he demanded. “Yeah,” I said, smiling. “What gave it away?” Mike and I became friends, in life and on Facebook. We know a lot of the same people, it turned out. The Brazilian Jiu Jitsu (BJJ) community is large and growing, but at higher ranks, it is still a close-knit, interconnected group. A year or so later, Mike described that chance meeting on Facebook, telling friends how we met. “David showed up without a belt, and tapped me out three times in about 5 minutes. Then he told me he was a black belt…I’d kinda figured that out at that point.”

Like a lot of the men who practice modern grappling and mixed martial arts, both Mike and I wear beards, and our ears look, well, our ears look like they need a little bit of ironing. When you’re fighting often, your ears take a beating. Rubbed against the mats, or gi, or against an opponent’s body, the delicate cartilage in your ears can separate, stretch, and then fill with interstitial fluid that hardens. The result is lumpy ears. They are a flag to other men, that those ears belong to someone who spends a lot of time on the mat.

Men used to take pride in fighting prowess. Being able to defend yourself and your loved ones was something to celebrate. It was part of your job as a man. Today, it’s a sign of toxic masculinity, something that we are supposed to want to give up.

Competitiveness, stoicism, dominance, and aggression, are characteristics identified as “traditional masculinity” in recent guidelines released by the American Psychological Association, elements that are deemed, “on the whole, harmful.” The day these guidelines were released, I watched men compete with each other, choke each other out, physically and aggressively, then walk off the mat and hug each other. I saw men offer compassion, connection, kindness, to the men they’d just physically attacked and been attacked by. Brotherhood was born from the very components we are told to abandon.

Mixed martial arts (MMA) is criticized as a well of toxicity, filled with misogyny, “bro culture,” celebrating a violent hyper-masculinity. Across the world, there’s a “crisis of masculinity.” Fewer men enrolling in higher education. Blue collar jobs drying up. Countless men lost to suicide, depression, countless people killed by angry men with weapons. We’re told Trump was elected by angry, violent, racist men, desperate to cling to their dissipating power. I’m no fan of Trump, but do think that if he’s the result of our approach to fixing men, then the medicine isn’t working.

Men are told violence should be eschewed, as toxic masculine urges that should be eradicated from our planet. Men must get better at communicating our feelings, and talking things out, settling problems with words, rather than our fists. I agree—in part. I’m a psychologist after all, and a therapist. I talk to people. Most of my patients are men, struggling in life, dealing with depression, angst, and relationship problems. Many need remedial lessons simply in identifying the feelings that boil through them, that they’ve never been taught how to recognize.

Men in my office struggle with discussing feelings, and often with talking in general. Couples’ therapy is a place where females hold the upper ground, with a more solid foundation of communication and emotional expression. Typically, when I treat men, I offer an option early on, that we can explore complex, nuanced, existential questions, or implement a more active, structured, “do this” treatment approach. Not surprisingly, many men seize the more active treatment approach that focuses on doing, as opposed to talking. The talking usually happens, but later.

Training in MMA is very much a “do this” approach. But success isn’t quick. Acquiring a black belt in Brazilian jiu jitsu takes an average of ten years of dedicated training. MMA training doesn’t have formal ranks, but success requires extensive skill and training in multiple disciplines. The image of MMA fighters as thugs and street fighters is a far cry from the reality of men I see on the mats. These men have the equivalents of my doctorate.

Stoicism is denigrated as men’s resistance to showing emotions, but on the mat, stoicism simply means “not quitting.” In 2015, British MMA fighter Andy Cona won his first professional fight—after 21 straight losses. Three years before, Andy said “I will lose a thousand fights and then win one, but I am not quitting.” Crying out in pain during a match is the equivalent of tapping out. In the face of a stronger opponent, despite injuries, and even in pain, the adept competitor learns to school his face, suppressing any sign or sound of pain or weakness.

“I fit the jiu jitsu on myself,” said black belt Jean Jacques Machado, who was born with a birth defect that left one hand stunted to a thumb and little finger. Machado has countless medals and championships, but his dominance wasn’t towards other people, but in dominating the technique. Our society typically views disability as weakness. But on the mat, disabled men like Machado and myself, learn to take our differences and not simply overcome them, but capitalize on them. My lack of a left hand creates an opportunity, an opening, that most of my opponents are not prepared for. The domination we practice is over the urge to simply accept weakness.

Actor Ed O’Neill holds a black belt, and entered training to learn to control and channel his youthful aggression. Competitors must be aggressive, in order to win. Aggressiveness is an essential psychological component in the ring, demonstrating one’s commitment. An aggressive attack is a man’s way of announcing his presence and his belief that this moment matters. But men who cannot control and manage their aggression, who cannot temper it and use it, lose quickly. Aggression is merely a tool, and successful fighters learn to use that tool, and sharpen it. It is the man who uses the aggression, not the other way around.

“If you want to be a lion, you must train with lions,” Carlson Gracie Jr. says, describing the intensely competitive environment on the mats. Men come to training to better themselves, to improve, learn, and prepare for the next match. If my opponent isn’t a lion, dedicated to the same level of personal improvement, then we both lose. No matter how many times you might tap that person out, if the competition doesn’t teach you something, you lose, and have wasted time. The competition that happens in MMA is not with our opponent, but with the forces which work and conspire to prevent us becoming better men.

Achieving victory over another man, defeating them, forcing them to submit—it’s not about saying “I’m better than you.” It’s saying “I’m better than I was yesterday.” It’s why almost every competition ends with a hug and a thank you. Because each gave the other something—the opportunity to learn, to progress and to become better. At “Camp Settle This Like Men,” and at MMA gyms around the world, black belt instructors lend their time and expertise to lead classes on kickboxing, jiu jitsu, boxing and self-defense. When we teach others our skills, we make them better, hone our own knowledge, and create stronger opponents, that we can measure ourselves against.

Losing is actually the most important experience in grappling. But no one talks about that. We focus on the winners, and condemn the competition as instilling hierarchy. But in a world where “everyone gets a trophy,” no one learns from their losses. When we lose, become dominated by a stronger, more skilled opponent, we learn the most important lesson that MMA has to give us: survival.

Mike Little, my friend from the camp has had to learn how to survive, battling depression and suicide. “When I was on the verge of taking my life, my wife, family and BJJ saved me. BJJ teaches you to not panic, but most important, never give up. How many times has someone been winning in a match by a lot of points, to then get submitted last second? I applied that mindset to my life—to never give up, and it saved me.”

Those moments of vulnerability are the things that drive men forward. Not to create a world where they can never be weak again, but to create a self who can survive those experiences. Actor Jonah Hill recently started training and said: “At 35, I try and get over the stuff that made me feel weak and insecure as a teenager. It’s just wasted time and lessons you’ll never learn. Trying to let go of that. Nothing more humbling than getting your ass kicked by a 12-year-old your first week. Got my first stripe today. I know it sounds corny but it’s pretty dope to jump in and do stuff you’d never think you’d be able to do.”

Modern martial arts training isn’t about invulnerability. Ed O’Neill says that training with the idea you’ll be able to beat up 10 men at once is a fantasy. “But,” he says, if faced with that experience after his years of training, “I could survive.”

I’m incredibly lucky, to train martial arts with not just excellent men and women, dedicated to improving themselves, but with rock stars of MMA from around the world. On a regular basis, I share the mat with Holly Holm, Jon Jones, Cowboy Cerrone, Diego Sanchez, Roman Dolidze, and countless other professional champion fighters. And they are the most humble, generous and eager-to-learn people I’ve ever grappled with. They’ve made competition, dominance and aggression a healthy part of their way of life, embraced them as ways to make themselves better.

That’s what manhood is about. It’s not about someone else telling you what it takes to be a man, but about learning to listen to yourself, and gaining the strength to stand up for yourself in the face of opposition. Sadly, that’s what’s lost these days. The world needs fighters, but right now doesn’t seem all that interested in providing them. That’s why those of us who feel that need and desire to challenge ourselves, to fight to become better, find a home with our brothers on the mat. When we settle things like men, it gives us all the opportunity to be better men.

David Ley is a clinical psychologist and certified sex therapist in Albuquerque, New Mexico. He is the author of several books and academic publications on sexuality and psychology. Follow him on Twitter @drdavidley.