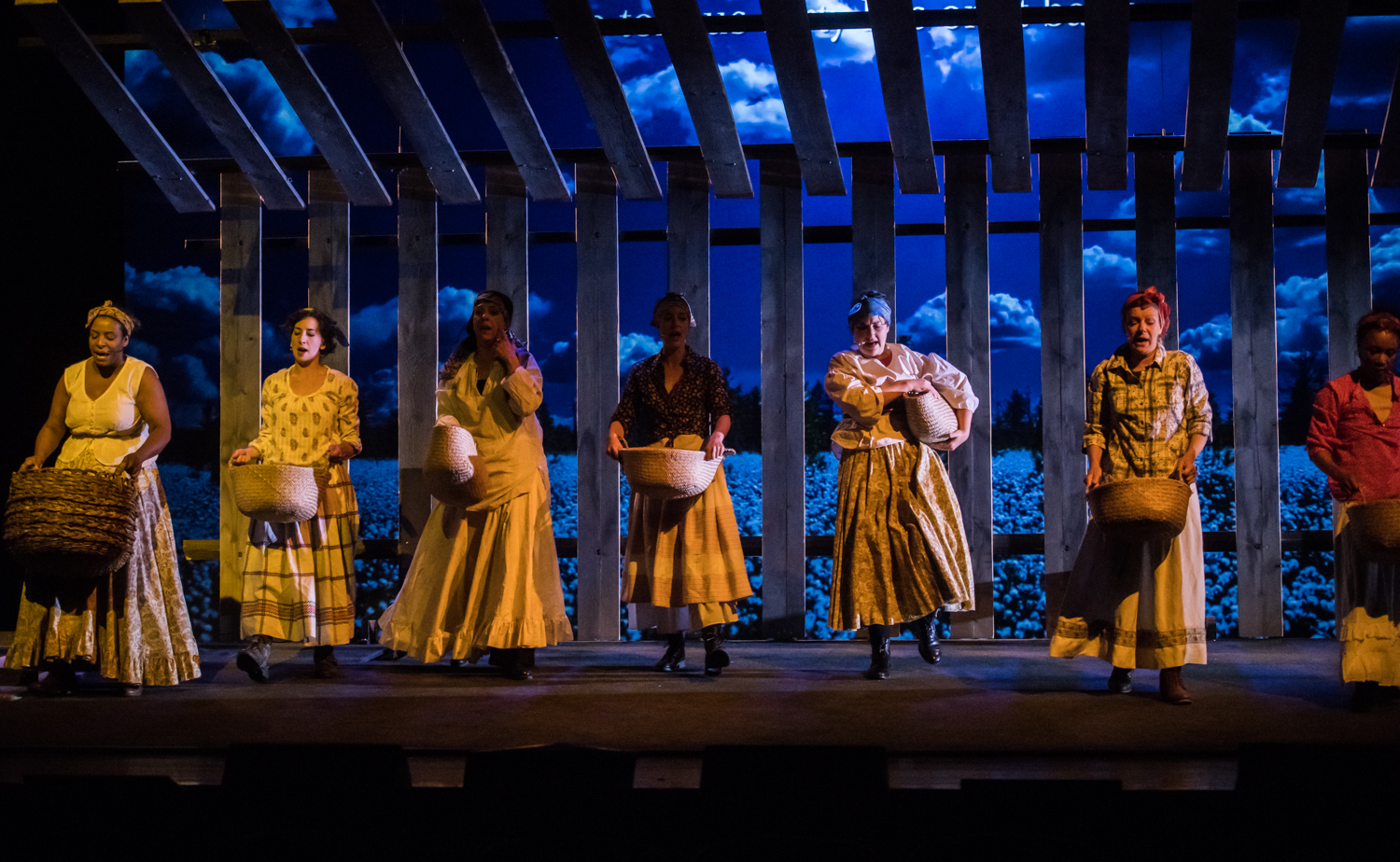 Quebec is a bastion of North American progressivism. Canada’s only majority-Francophone province is a place where postsecondary education is heavily subsidized, unions remain powerful, the social safety net is thick, and the power grid is fuelled by green hydroelectric energy. Given all this, it might have surprised some outside observers to learn that Quebec briefly played host this summer to a theatrical production described by one prominent artist as “reminiscent of blackface minstrel shows.”

Can white women play black slaves? Critics and artists say an emphatic "No!" as a production by acclaimed Quebec theater director Robert Lepage is cancelled amid loud and angry protests. My take on the debate over cultural appropriation – https://t.co/0sFfIOOSSq

The controversy sprang to popular attention when Montreal’s Jazz Festival canceled the remaining performances of SLAV, in which a white star (surrounding by a largely white cast) performed songs composed by black slaves. Director Robert Lepage, a giant of the Quebec stage, denounced the decision as “a direct blow” to his artistic freedom. But activists within Quebec’s black community described the cancelation as necessary. “I am not the type to scream about cultural appropriation, but this project left me with an acrid aftertaste,” Québécois rapper Webster wrote in Le Devoir. “How many will benefit from black cultural heritage set to stage so skillfully as profits will probably never trickle down to members of that community?”

It is tempting to lump this episode in with similar controversies that have played out in other North American cities but, as described below, the particular history of Quebec, and the Montreal Jazz festival in particular, show why this controversy cannot be chalked up to mere political correctness.

The creation of Montreal’s now world famous Jazz Festival in 1980 followed a tradition of successful black-run community events in the city, organized by artists such as Charles Biddle and Rouè-Doudou Boicel. In the latter case, his Order of Montreal biography describes him as having “paved the way for the [Jazz] Festival”—a somewhat sanitized take on what really happened.

In fact, Boicel’s Rising Sun Celebrity Jazz Club burned down in 1990. A black native of Guyana, he was never able to compete with the government-backed creators of Montreal’s Jazz festival, who were mostly well-connected white Francophones. As Boicel told an arts magazine in 2008:

“I didn’t get any help from the city or the provincial and federal governments. They told me they didn’t want to support American culture. I told them [that Montreal-born jazz icon] Oscar Peterson was in my festival. They told me, ‘He’s an American.’ Now they spend millions and millions to promote international artists — which are American artists…The whole thing, I believe, is because I’m black. I’m not Québécois pure laine.”

The last two words—which translate as “pure wool”—is a commonly used in the Québécois idiom to describe the special status informally reserved for families that descend from the original settlement of New France in the 17th century. Anglos, Jews, Muslims, people of colour, immigrants and refugees still find themselves situated outside this club. And it is this fact that helps explain the seeming paradox of Quebec society: an ideologically progressive welfare state that often seems jarringly monocultural when it comes to cultural issues.

One of the reasons Québécois society still has so many rough edges when it comes to multiculturalism is that it retained its character as a rural, agrarian, somewhat closed-off society well into the 20th century. The province’s “Quiet Revolution,” which began in the early 1960s, emancipated French Canadians from the crushing social conservatism of the Catholic Church. In the space of just a few decades, a politically quiescent farming province was modernized and secularized. A new generation of Francophones took their place as business leaders, equalizing power with an English-speaking Montreal-based minority that had controlled Quebec’s most profitable industries for generations. But the revolution worked a little too well, some would argue—because the elites who took control of Quebec Inc., and control much of it to this day, represent a virtual white monolith.

Yet this does not trouble Quebec’s pure laine establishment as much as one might think— because many francophone nationalists with disproportionate political influence still view themselves as history’s underdogs—a status rooted in France’s defeat by the English on the Plains of Abraham two and a half centuries ago. This aspect, too, makes Quebec unique within Canada—and, in its extreme form, sometimes can appear analogous to lingering resentment among American southerners over the outcome of the U.S. Civil War.

In their heyday, in fact, radicalized Québécois nationalists openly embraced the idea that French Quebecers themselves were so downtrodden as to constitute the Nègres blancs d’Amérique—white negroes of America. And one still hears echoes of this persecution complex in modern political commentary. The very fact that SLAV was forced to shut down its Montreal show is evidence, one prominent sovereignist wrote, of “the prosecution of our existence as a people…as if the historic francophone majority were too much in Quebec, as if French was too much as well.”

The star of SLAV, singer Betty Bonifassi, told La Presse newspaper that, after researching the history behind John Steinbeck’s Of Mice and Men, she decided to record an entire album of African-American work songs. (She performed those works, without attracting much controversy, at the 2014 edition of Montreal’s Jazz Festival in a show called Slave Chants, Hope Chants.) “My mother is Serbian,” she added. “[They are] a people that like others in the Balkans were slaves to large empires for centuries.” Bonifassi even went so far as to confess that “we wanted to appropriate the pieces while keeping their essence.”

“I don’t understand why we had to cede to threats from a handful of people who would give us a hard time if we dared to use blackface,” wrote Louis Morissette, one of the province’s most prominent comedians, in a 2016 issue of his wife’s magazine. As I wrote at the time, such comments go beyond a mere rejection of political correctness or censorship. They seem to betray a real ignorance of history:

The practice of putting black makeup on white actors is perceived as a specific reference; a trigger, for members of black communities, to North America’s shameful history of minstrel theatre. The shows were intrinsically racist; people of colour were portrayed in demeaning, stereotypical ways for whites’ amusement.

At the time, Morissette had cast a white actor in blackface to play an Afro-Canadian celebrity on a popular comedy program. He then backtracked, and instead cast Quebec’s most prolific black actor, Normand Brathwaite, without addressing the larger issue of people of colour being excluded from Quebec productions. (A whole essay might be devoted to Brathwaite himself, who has been dismissed by some black Quebecers as a sort of tokenistic Uncle Tom figure). A year later, Montreal’s Théâtre du Rideau Vert staged a production featuring a white actor wearing black makeup. The theatre’s prominent artistic director, Denise Filiatrault, became furious when she received criticism, declaring at one point, “There will be no more black characters. It’s finished.” Such theatrical devices would, of course, be utterly unimaginable in Canada’s other (Anglo) provinces.

Like me, many Quillette readers no doubt are skeptical of claims of cultural appropriation when they target inanimate cultural artifacts such as food or clothing. But when living human beings are excluded or implicitly denigrated, it becomes more serious.

A common refrain one hears from conservatives is that activists should simply vote with their wallets, avoiding shows that they believe to be contaminated with cultural appropriation. But SLAV is one of those rare cases in which even free-market absolutists should feel some solidarity with progressive critics: the entire Quebec entertainment industry is a creature of massive government subsidies, which are justified by a perceived need to protect French Québécois culture from Hollywood’s 500-channel English-speaking leviathan. So long as that system of subsidies exists, it’s hardly unreasonable that black Quebecers believe they should be visibly represented in a marquee theatrical production about the defining tragedy of North American black history.

Moreover, the Quebec nationalists who defend SLAV on free-speech grounds seem hypocritical, given the other policies that their government has prioritized. The province still runs a language-policing bureaucracy that fines business owners who do not use French “predominantly” in public communications. No other part of Canada embraces this kind of monoculturalism so ruthlessly. Moreover no government censors forced the cancellation of performances at the Jazz festival and protests were completely peaceful. (Similarly, Lepage’s latest production, Kanata, which would have featured predominantly white actors performing Indigenous Canadian roles, also was recently scrapped after the Parisian theatre backing the project ceded to activist pressure.)

With the SLAV affair, it appears the marketplace of ideas functioned more or less as it
should.

The fiercest advocates of “intersectional” policymaking typically cast conflicts as overlapping power struggles between groups that have power and groups that don’t. But in Quebec, the doctrine is impossible to apply coherently, because the entire power structure is itself based on the increasingly obsolete premise of a white, French-speaking majority as being disadvantaged in the larger sweep of history and geography.

At the dawn of the Quiet Revolution, the province was almost a perfect blank slate for progressives. The power utilities were nationalized; the public workforce was unionized; secularized health and education policies were created more or less from scratch. But race was always a blind spot. The SLAV controversy shows that Quebec nationalists will continue to ignore it at their peril, and progressives who push for power redistribution along ethnic lines may end up creating fresh problems, even as they solve old ones.